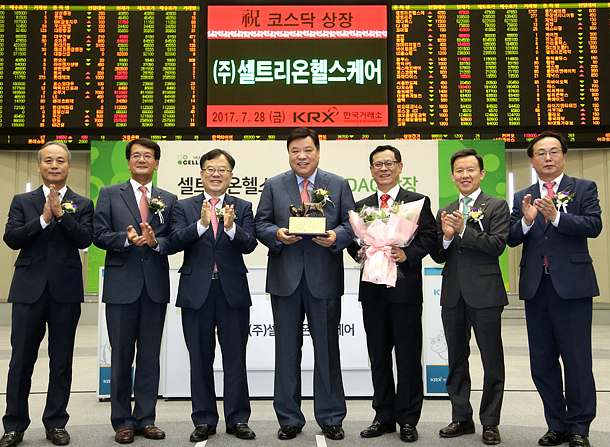 Celltrion Healthcare, a marketing affiliate of biopharmaceutical company Celltrion, made an impressive debut on the secondary Kosdaq on Friday, quickly becoming the second largest player on the trading exchange in terms of market capitalization.

The upbeat performance is tied with the expectations for Celltrion, the largest Kosdaq-listed company that sells biosimilar drugs such as Remsima and Truxima.

Shares of Celltrion Healthcare opened at 43,650 won after the company priced its initial batch of shares at 41,000 won. It sold 13.9 million shares, commanding an initial market capitalization of 6.875 trillion won.

Founded in 1999, Celltrion Healthcare is the exclusive sales body for the drug maker as it leads local and global marketing of the producer’s biosimilars to over 100 regions.

Analysts expect that the proceeds of the initial public offering will go towards expanding the production lineup and marketing partners in different countries as well as jointly developing new biosimilars with Celltrion.

The newly-listed company enjoyed buoyancy on the initial day and some analysts see that the upward momentum will continue thanks to the planned releases of other biosimilar products by Celltrion.

“Celltrion has made inroads into Europe and maintained a strong footing there,” said Jin Heung-kook, analyst at Korea Investment & Securities.

“It launched Remsima in the United States back in January and Truxima in April for the European market. In 2018, Truxima will be released in the U.S. along with Herzuma in the Europe,” he said.

For 2019, Celltrion planned on bringing Herzuma, an anticancer antibody biosimilar, to the U.S.

If all goes as planned, Celltrion Healthcare can directly benefit from the sales performance of its pharmaceutical affiliate.

Investors’ positive sentiment for the new stock is also linked with the latest financial results from Celltrion, which pulled off an earnings surprise in the second quarter.

Celltrion’s operating profit jumped 79.4 percent to 138.3 billion won between April and June compared to the same period last year, backed by strong sales of its Remsima in overseas markets.

KB Securities projects that the marketing affiliate will generate a yearly operating profit of 239.7 billion won, which increases 34.2 percent from the previous year.

But Seo of KB Securities warned that any stalemate in regulatory approval will act as a critical risk for both Celltrion and Celltrion Healthcare.

The stiff competition between Celltrion other biosimilar companies could block growth, she added.