How to put your phone on a diet

How to put your phone on a diet 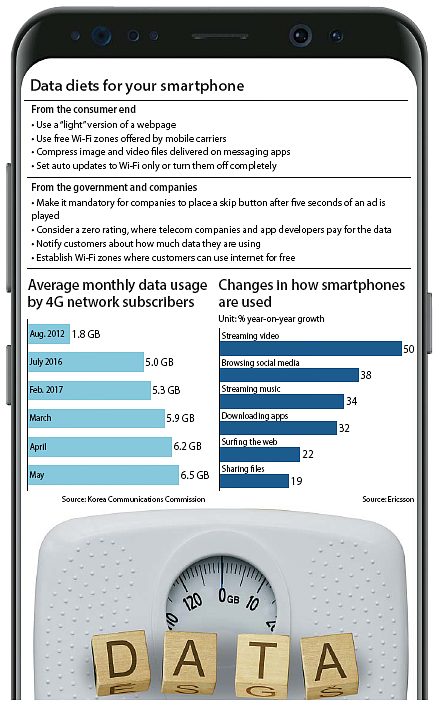 As mobile apps eat up more data, consumers are coming up with ever clever ways to put their smartphones on a diet.

A recent survey by the Green Consumers Network in Korea found that half of cellular subscribers use more data than their plans allow, forcing them to pay a penalty on the excess each month. So consumers are hunting for ways to preserve their data in much the same way they might seek energy-efficient home appliances or cars to reduce electricity and fuel use.

For instance, when users visit major search engine sites like Naver or Daum, they expend an average of 1 megabyte of data. Assuming they visit these portal sites seven times a day, they might use an average of 210 megabytes of data a month just accessing the homepage.

In response to consumer demand for more data-efficient apps, Naver released a “light” version of its search site that cuts data usage by 70 percent, meaning that 210 megabytes a month can be trimmed to 150.

The Facebook app similarly has a data-saving mode that downloads images and videos at a lower quality to use up fewer bytes.

Messaging apps like KakaoTalk are also data killers. Now, users can choose whether they want to send pictures and video files at their original quality or less. Some argue that apps have to invest more in creating codecs that compress voice and video content so that files can be sent with less data while preserving the same quality.

Although companies are releasing functions and modes that cater to data dieters, critics of data overload say the sites should just reduce the number of links and menu items on their homepage because most of the links, they say, don’t get much traffic anyway. They believe homepages should be updated so that users only see necessary items on first load, with additional links made available only after scrolling.

These critics also take issue with the ads that pop up on video streaming sites before videos play. A 15-second high-definition advertisement takes roughly 8 megabytes of data. That means if someone watches about four videos a day, the ads alone will cost about 960 megabytes of data a month.

Consumer advocacy groups like the Green Consumers Network in Korea argue it should be mandatory for companies to place a “skip” button after five seconds of ads. Streaming sites like Naver and YouTube, of course, are against the measure.

To cut down on data, smartphone users also make use of free Wi-Fi offered to cellular subscribers in public places. Since February, LG U+, Korea’s smallest mobile carrier, has been offering faster LTE-based Wi-Fi in the subway systems of major cities around the country. Korea’s largest mobile carrier, SK Telecom, plans to establish a similar network within the year.

The Korean government wants to install 20 more public Wi-Fi zones around the country. Mobile carriers are putting effort into setting up their own Wi-Fi zones, and there are plans to make about 65 percent of Wi-Fi zones operated by the nation’s three mobile carriers available to subscribers for free regardless of their carrier.

Smartphone users should also take note of app update settings, because often, an update for an app can call for tens or even hundreds of megabytes of data. Users can choose between automatically updating each time a new version comes out, updating only with a Wi-Fi connection and no automatic updates to avoid using massive data.

There is now even talk in Korea of mobile carriers and app developers paying for the data that their customers use. SK Telecom is already testing the waters by not charging customers when they play the game Pokemon Go. It was only meant to be temporary, but positive feedback led the company to extend the promotion to fall this year.

Such a scheme is known in Korea as a “zero rating.” “As the zero rating has an effect of improving consumer benefits, there is a need to more closely revive the issue,” said Lee Hyo-seong, the newly appointed head of the Korea Communications Commission.

However, while such a scheme can contribute to cutting households’ phone bills, sources in the industry say they are worried that such a decision could fence out small and medium-sized developers who have difficulty paying for the data.