Kim Hak-min, 30, was born in coal country in the North Korean province of North Hamgyong, which borders China. His father worked in the mines as an engineer.

At the age of 7, Kim became obsessed with electric gadgets. “I just wanted to disassemble everything,” he says. “I was especially fascinated with speakers, blown away by the fact that all kinds of sounds were coming from a tiny box.”

At 13, he started fixing neighbors’ watches and electrical appliances, earning the nickname “Repair Boy.” It was a hobby that would eventually land him in jail – and lead him to defect to South Korea.

“Because I didn’t have many tools,” he says, “I developed a set of skills to fix products. For example, to take apart a wristwatch, which is composed of many parts, all I needed was a tiny needle.”

After his father died of liver cancer in 2003, Kim started making a living fixing people’s broken appliances. He got to know how televisions work.

“To prevent North Koreans from watching Chinese channels that air South Korean dramas, state security officials fix televisions so they only broadcast state-run channels. I was the kid in the town who could unlock that code and let people watch South Korean dramas. I watched them myself.”

He was arrested three times for watching forbidden dramas. The first two times he avoided punishment because he was underage. The third time he got caught, in early 2009, he was 22.

“Watching a single drama can earn you a five-year sentence. I was busted for having watched hundreds! I was certain I would be sent to a far-flung prison camp, where I would perish.” 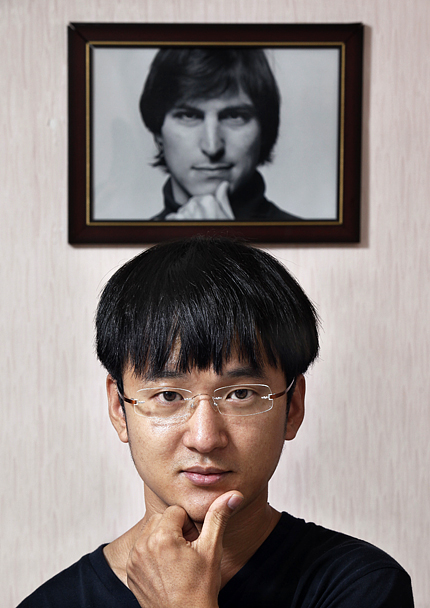 Kim Hak-min, a North Korean defector-turned-repairman for iPhones with the nickname SogangJobs, poses in his room, where he receives customers and fixes their broken iPhones, in Mapo District, central Seoul, during an interview with the Korea JoongAng Daily on Wednesday. [PARK SANG-MOON]

Soon after his arrest, beatings and sleep deprivation began. “They [interrogators] made you sit absolutely rigid for 15 hours straight,” he recalls. “If you move an inch, a punch follows.”

To his surprise, he was released after two months.

“People in the town pleaded with the authorities to release me, for which I am forever grateful.” They were the neighbors and friends whose electric gadgets Kim had fixed in the past – often for free.

“This is something people in the capitalist South find it hard to understand,” he says. “But in the North, we didn’t have a clear sense of payment for services. When people approached me and asked me to repair their televisions, I would go to their houses and fix them. But many times I couldn’t mention money because I could see how they were struggling to make ends meet. A television was their only source of joy. I couldn’t demand money from such families.”

The South Korean dramas had also taught him something about the affluent outside world – and made him yearn for it.

“Before I watched South Korean dramas, I was brainwashed to believe that South Korea was full of people dying of hunger and was ruled by imperialist U.S. army. Once I watched these dramas, I saw that people were so civilized. The way men spoke to women was so polite and full of courtesy. I was immediately attracted to the country over the border.” 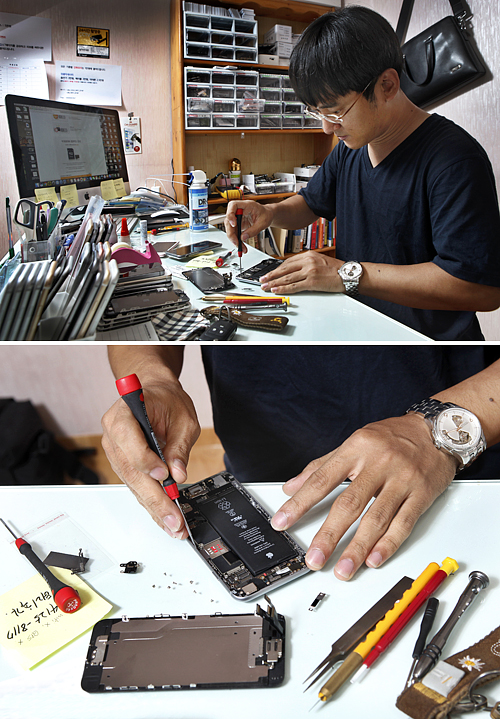 He crossed the frozen Yalu River to China with a girlfriend on a freezing day in January 2011.

“My girlfriend began sobbing, worrying about getting caught by border security and being sent to a prison camp. She wanted a suicide pill. I told her, ‘Our mission here is to make it to the South alive.’”

After making another crossing into Thailand, a route arranged by defection brokers, the couple landed in Seoul in March 2011. Kim had an identity crisis, became depressed and broke up with his girlfriend.

“Though I was standing on the land I had dreamed of, I soon realized there weren’t many things I could do here. I didn’t know anyone. I couldn’t get a job. I lived in a gosiwon (one-room studio), which made things much harder.” 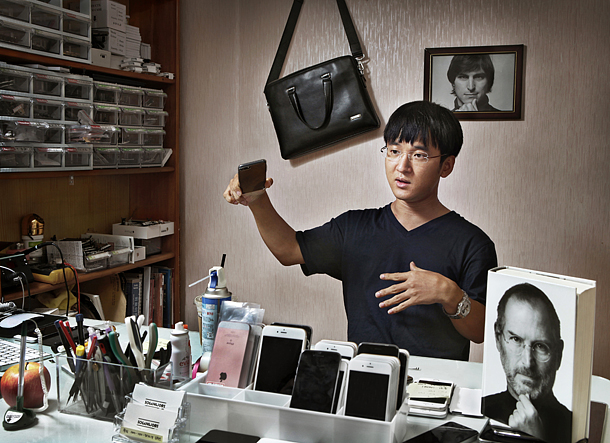 A book turned Kim around: “Steve Jobs” by Walter Isaacson, which was published shortly after Jobs’ death in 2011.

“The book filled me with energy for a better life. It made me determined to go to college. I slept only a few hours a day, studying and memorizing 100 English words every day. After two and a half years, I was admitted to Sogang University in 2014.”

“He said you should find work that you like, just like you try to marry someone you love. You have got to have passion for the work you do, that was his lesson. For me, it was fixing electronic gadgets. Jobs’ idea that you should actively lead your life with intuition and passion, instead of being swayed and interrupted by others, practically saved my life. I am who I am today because of Jobs.”

Kim is majoring at electronic engineering at Sogang University in Mapo District, western Seoul. He took a leave of absence after his sophomore year to concentrate on a business he started. He rents a two-room house in Mapo where he lives and works.

He hung a neon sign outside that reads: “SogangJobs.” He repairs damaged iPhones. Business is good. He’s in the process of trading in his Honda Accord for a second-hand Mercedes.

“I fell in love with the iPhone when I first saw it,” says Kim. “When you dissemble an iPhone and see what’s inside, it’s just beautiful. A great engineer not only makes gadgets beautiful on the outside but also inside.”

When the Korea JoongAng Daily visited his shop Tuesday afternoon, a stream of customers arrived, hoping he could work some magic on their iPhone for far less than Apple’s official repair service. On a wall hangs a framed photo of Steve Jobs.

He refuses to repair any other smartphone. “I don’t even want to touch them,” said Kim, laughing.

The only time he fixed a Samsung product was when he met a Sogang student whose Samsung laptop screen was shattered. “She was crying. I found out she was supporting her parents financially and working every day to pay her tuition.” Kim went to a Samsung repair center for chip replacements. Then he fixed the screen himself. He didn’t charge her. She visited him a few days later with a thank-you gift: a soft drink.

“When I fixed people’s gadgets for free in the North, I saw people overwhelmed with joy. That led me to believe that the most important thing in life is not money or something tangible, but honor.”

“I think it’s all connected. I was released from an interrogation center in North Korea because my neighbors pleaded with the authorities for my release,” said Kim. “I had helped them out of a sense of honor as a technician.

“My life has been connecting the dots that people in the North and South have drawn for me. It’s like what Steve Jobs said: ‘You can't connect the dots looking forward; you can only connect them looking backwards. So you have to trust that the dots will somehow connect in your future.’”