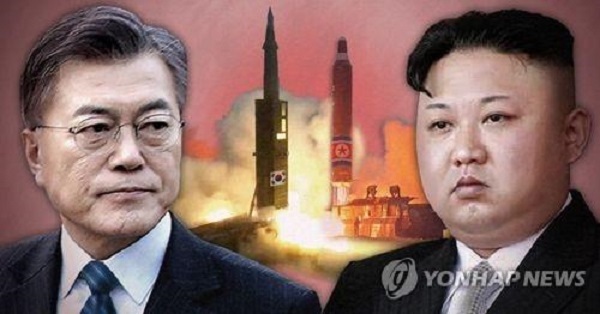 South Korea’s Joint Chiefs of Staff said the missile was fired at around 11:41 p.m. from Chagang Province, which borders China. Seoul and Washington are currently analyzing what type of missile it was and how long it flew, the military said.

Yoshihide Suga, Japan’s chief cabinet secretary, said the missile flew for about 45 minutes before landing in the waters of the country’s exclusive economic zone. No damage was reported.

Very rarely has North Korea fired a missile at night. A local military official said it appeared Pyongyang was trying to show off its ability to carry out the test in the darkness, which usually makes observation more difficult.

The latest missile test was held a day after the 64th anniversary of the armistice agreement that ended the Korean War with a ceasefire, which North Korea celebrates as Victory Day.

North Korea watchers had thought Pyongyang would launch a missile Thursday after a Pentagon source predicted last week that a launch was likely to occur around that time. North Korea has a history highlighting crucial national holidays with military provocations.

An official from South Korea’s Ministry of National Defense said Thursday there were no imminent signs of a North Korea missile launch, quelling global fears.

The missile tests are a critical blow to President Moon, whose North Korea policy is grounded on dialogue and engagement.

Pyongyang still hasn’t given any direct response to Seoul on its offer to hold inter-Korean military talks to cease all acts of hostility near the border. The North also hasn’t responded to Seoul’s proposition to discuss a reunion for war-torn families on Aug. 1 either.