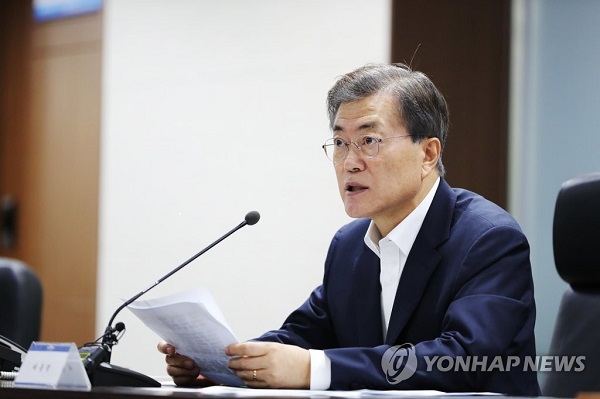 The missile fired by North Korea 20 minutes before midnight on Friday was an intercontinental ballistic missile (ICBM) that peaked at an altitude of 3,700 kilometers (2,300 miles) and traveled nearly 1,000 kilometers before landing in the East Sea, a more "advanced" version than the one tested on July 4, according to South Korea’s Joint Chiefs of Staff on Saturday.

National Defense Minister Song Young-moo said Seoul and Washington fired surface-to-surface missiles into the sea early Saturday in a display of the allies’ military readiness. Strategic assets will soon be flown in from the United States, he continued, without specifying further.

Both countries will also speed through consultations to continue the deployment of the Terminal High Altitude Area Defense (Thaad) antimissile system, said Song. Two launchers are currently operational in Seongju County, North Gyeongsang, some 300 kilometers south of Seoul. Four more are currently stored on a U.S. military base.

Moon said the allies will engage in a “much stronger show of military force” than North Korea’s ballistic missile launch, and that Seoul will call on the UN Security Council to hold an urgent meeting on Pyongyang’s latest test to draft tougher sanctions against the regime.

If necessary, he continued, the South Korean government may consider implementing unilateral sanctions.

But the left-leaning liberal stuck to his conciliatory approach to Pyongyang, saying the country’s offer to hold inter-Korean military talks was still open, and that Seoul will strenuously pursue the denuclearization of the Korean Peninsula with “patience and perseverance.”

Pyongyang has yet to give any direct response to Seoul on its offer to hold military talks to cease all acts of hostility near the border. The North also hasn’t responded to Seoul’s proposition to discuss a reunion for war-torn families on Aug. 1.

North Korea bragged about the ICBM launch on the state-run Korean Central News Agency on Saturday, saying leader Kim Jong-un personally ordered the launch and observed the test with the country’s scientists and missile developers.

According to the agency, the projectile was the same Hwasong-14 version tested on July 4, and it reached an altitude of 3,724.9 kilometers and flew 998 kilometers for 47 minutes and 12 seconds before landing on its target in the East Sea with “exact precision.”

The regime said the missile was intentionally flown at a steep angle in order not to inflict harm on neighboring countries.

U.S. President Donald Trump said in a statement issued through the White House that Washington condemned the latest “reckless and dangerous action” by the North Korean regime, adding it “rejects” the regime’s claims that these tests and weapons ensure North Korea’s security.

“In reality, they have the opposite effect,” said Trump. “By threatening the world, these weapons and tests further isolate North Korea, weaken its economy and deprive its people.”

Trump vowed to take all necessary steps to ensure the security of the U.S. and its allies.

In a separate statement, U.S. Secretary of State Rex Tillerson urged China and Russia to do more to rein in the North.

“As the principal economic enablers of North Korea’s nuclear weapon and ballistic missile development program,” he said, “China and Russia bear unique and special responsibility for this growing threat to regional and global security.”

All nations, said Tillerson, should take a strong public stance against North Korea by maintaining and strengthening UN sanctions.