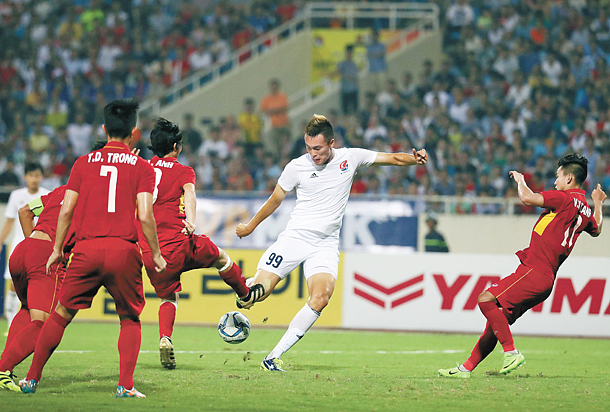 Kim Shin-wook, in white, attempts a shot during the All-Stars friendly match against the Vietnamese U-22 national team at My Dinh National Stadium in Hanoi on Sunday. [YONHAP]

The Korean professional football All-Stars lost 0-1 to the Vietnamese under-22 national team in a friendly match on Saturday.

At My Dinh National Stadium in Hanoi, the All-Star team of the top-flight K-League Classic fell to the Vietnamese team for the 29th Southeast Asian Games after conceding a goal to Nguyen Van Toan in the second half.

Although this match was tagged as the 2017 K-League All-Star Game, it was also considered to be an international showdown between Korea and Vietnam, since the All-Star members were all Koreans. And unlike other All-Star Games where the fancy skills of the players and fan entertainment are more emphasized, the contest in Vietnam was tight and competitive.

In the 30th, Luong Xuan Truong, the only Vietnamese to play in the Korean league with Gangwon FC, took a powerful free kick only to see it land off target.

The K-League All-Star’s veteran goalkeeper Kim Yong-dae, who is with Ulsan Hyundai, got busy later as the Korean defense struggled to stop the young Vietnamese squad’s counterattacks. In the 36th, Kim, 37, denied Lam Ti Phong’s close-range strike down low to make a save on Cong Phuong’s left-footed attempt two minutes later.

Both teams were allowed to make seven substitutions in the match, and the All-Stars replaced five players to sway the match in their favor. The Vietnamese, however, were still controlling the match.

The Vietnamese tested Daegu FC goalkeeper Jo Hyeon-woo with Vu Van Thanh’s shots in the 51st and the 54th. In the 68th, Nguyen Tuan Anh’s effort stung the palms of Jo.

The Koreans were finally punished in the 70th when Nguyen Van Toan’s right-footed strike deflected off Jeonbuk left back Kim Jin-su and found the back of the net.

The K-League All-Stars had their chance to even the match when they earned a free kick near the box, but both Kim Shin-wook’s strike in the 80th and Kim Jin-su’s left-footed shot in the 86th went over the net.

This was the first time since 2008 in Japan that the K-League had its All-Star Game outside home turf. The league confirmed in May that its All-Star Game for the 2017 season will be held in Hanoi, since this year marks the 25th anniversary of diplomatic ties between Vietnam and Korea.

The K-League also said it wanted to explore the Vietnamese market with the All-Star Game, as the popularity of Korean football has been growing there.