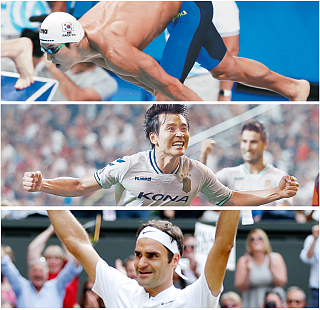 In sports, where athletes are required to stay in peak condition at all times, age can sometimes become a bit of a hindrance. Although the average retirement age of athletes has definitely been on the rise, they still retire way earlier than people in pretty much any other profession. In sports, being in your 30s is considered old.

Normally, the word “old” in sports can have two different connotations. An old player may be someone who is no longer physically able to perform all the time, or it could mean a veteran athlete that has a great foundation of experience built up over their career. Every sport has its veterans.

Park Tae-hwan, an Olympic swimming gold medalist, recently competed at the 2017 International Swimming Federation (FINA) World Aquatics Championships at the Danube Arena in Budapest, Hungary, which was his first world championship appearance since 2011. Though Park concluded the event with no medals, he still managed to leave a strong impression, reaching the final in two of the three events he competed in.

Since physical strength weighs heavily in swimming, the majority of swimmers tend to retire in their early 30s or even in their late 20s. Due to this reason, Park, who is only 27 years old, was the oldest swimmer when he got to the final for both the men’s 200 meter and 400 meter freestyle.

Though Park wasn’t able to medal, his potential and his determination to reach the final in two of the events has once again surprised fans. It is uncertain at this point as to whether Park will compete at the 2020 Olympics, but from his mentality throughout the world championship, the fans hope Park will overcome his age and further challenge himself.

It’s not only Park that is continuing his career as a professional athlete. In Korea Baseball Organization (KBO), Lee Ho-jun of the NC Dinos continues his last season as the oldest hitter at age 41. As of Saturday, throughout Lee’s 20 seasons in the KBO he has had a 0.282 batting average with 1244 RBIs and 331 home runs.

In the K-League Classic, Lee Dong-gook, striker for Jeonbuk Hyundai Motors, is the most dominant veteran player, being the oldest active player in the league.

Though he is heading into his 40s, Lee is still rated as one of the K-League’s top strikers.

In Jeonbuk’s most recent K-League match against FC Seoul on July 23, Lee scored a goal to lead Jeonbuk to a 2-1 victory in front of the Korean national football team’s head coach Shin Tae-yong, who visited the match to check on possible candidates for the upcoming qualification match. As Shin announced that age will not be a factor in selecting players for the upcoming final qualification match, Lee has set his sights on representing the country once again.

Though Lee struggled from an injury at the beginning of the season and is no longer a starting player, whenever he gets on the pitch he plays a large role in leading Jeonbuk to victory. As a result Lee is among the most-trusted players in the eyes of Choi Kang-hee, head coach of Jeonbuk, and is now only four goals away from achieving his 200th career goal.

In tennis, Roger Federer, 36, recently made history at Wimbledon, winning it for the eighth time and achieving his 19th grand slam title. And in women’s tennis, Venus Williams, 37, continues to surprise tennis fans at every tournament with her ability to play - and often win - against younger players.