In the center of Seoul, hidden between office buildings, is a white couch that allows visitors to feel like K-pop singer G-Dragon’s girlfriend for a solid five minutes. When a viewer sits on the sofa, a huge screen shows the Hallyu star nonchalantly walking towards them. He sits at the other end of the couch, makes hearts with his fingers and lies down on the viewer’s knees. Some lucky visitors may even get a kiss on the cheek - but of course, this is only on the screen.

The second floor of the Korea Tourism Office (KTO) in Gwanghwamun is home to a number of digital attractions using augmented reality (AR). As well as the infatuated G-Dragon, visitors can pose alongside other Big Bang members and stars like 2NE1.

“A majority of the visitors come in group tours from Asia. Similar Hallyu content using AR technology exists in other areas, but I think our accessibility in the city centers allows people to stop by more easily,” explained a manager at the KTO.

AR is technology that provides a composite view of the real world with computer graphics laid over it. The most famous example is Pokemon Go, a game that allowed users to catch Pokemon characters that appeared on their phone screen as if they were in the real world.

Virtual reality (VR) differs from AR in that it takes users into a completely immersive computer generated world, as opposed to layering images over reality.

While in the past there was a clear distinction between reality and the 2-D images seen on a television or smartphone screen, the entertainment industry is increasingly moving to embrace AR and VR.

The big question, then, is whether these new technologies can become more than just a fad and provide a realistic enough experience to become a viable form of entertainment.

Over the last few years, K-pop hologram concerts have become increasingly popular. As the name suggests, a hologram of a popular K-pop star is projected onto a stage, allowing audiences to enjoy the performance as if it were live.

The first idol group to have their entire concert played via hologram was SHINee in 2012. The company behind the show, D’strict, first introduced the technology with a traditional musician in 2010, but at the time it was not as realistic.

“In 2012, we developed technology for a more realistic visualization and we thought ‘why not combine it with a more modern genre like K-pop this time?’” explained Lee Sung-ho, the company’s CEO.

D’strict has since organized similar concerts for Girls’ Generation, Psy and Big Bang.

While digitally rendered holograms of performers that are no longer alive - most famously 2Pac and Michael Jackson - have been used in the United States, D’strict was the first company to product an entire concert performed by holograms of K-pop singers.

Although die-hard fans may not feel like the hologram experience is a suitable replacement, for visiting hallyu enthusiasts it can provide an opportunity to watch their favorite artists perform that they may not otherwise get. Holograms also offer a more cost effective approach to touring.

Lee hopes that in the future it might be possible to conduct live fan meetings where an artist stays in Seoul while fans in other countries are sitting in front of live holograms of the star.

Until recently the impetus behind VR technology has generally come from gaming. A focus group study conducted in February, however, found that consumers who were already familiar with VR are looking for content closer to lifestyle activities such as travel, concerts and exercise.

One unexpected area that has recently embraced VR technology is classical music. In September the London-based Philharmonia Orchestra launched a VR app viewable on PlayStation’s VR device. The 3-D video shows the orchestra performing the third movement from Sibelius’ Fifth Symphony at the Southbank Centre, London.

Sports broadcasting is also utilizing the new technology. LiveLike is a New York-based start-up that allows fans to meet up in virtual rooms where they can watch live sports games together and interact with each other. 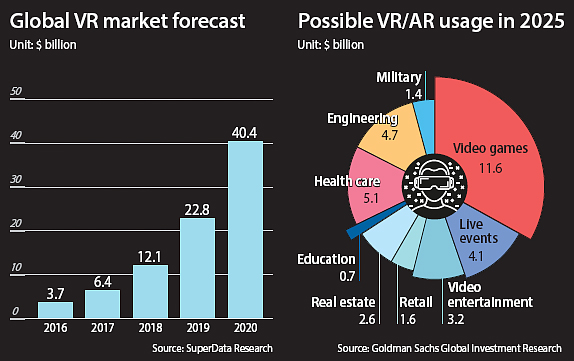 The biggest contributor to the development of AR and VR has been the gaming industry. SuperData Research predicted that the VR market will grow from $6.4 billion this year to $40.3 billion by 2020, initially driven by gamers. A Goldman Sachs report estimated that video games will take up almost 40 percent of AR and VR software use by 2025.

Last year was a big year for the VR and AR gaming industry. Financing reached $1.8 billion last year, easily double the $766 million in 2015 and $822 million in 2014 according to CB Insights. Global IT giants including Facebook, Microsoft and Google also competitively released head-mount devices (HMD) throughout the year. In Korea, Samsung Electronics released the Gear VR.

The worldwide success of Pokemon Go was also a significant event that proved the potential influence and commercial profitability of such games. The game raked in $950 million between July and December last year, according to mobile research firm App Annie.

Companies with established intellectual property are now scrambling to jump on the AR and VR craze.

Despite this rise in popularity the technology still has obstacles to overcome, including the high price of HMDs and discomfort like weight and dizziness that limits how long users can play games for. 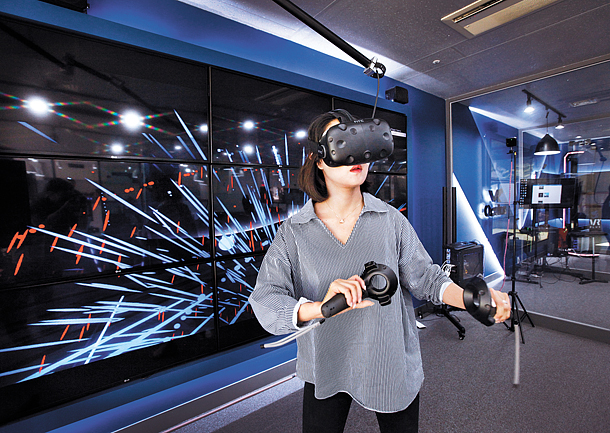 VR Plus’ show room near Gangnam Station provides a space where visitors can try virtual reality games for a small fee. The venue is Korea’s first VR room and offers visitors the opportunity to try advanced VR devices. [PARK SANG-MOON]

The Pokemon Go phenomenon was a milestone in Korea that really publicized the idea of AR and VR in the country, especially to non-gamers. When the game was first released last year people flocked to the east coast - the only area where it could be played at the time - to try it out.

A year has passed but the gaming scene still lacks a successor to maintain public interest in VR and AR.

“Most Koreans live in apartments where there is not enough room for VR games that require exaggerated movements. This, along with the high price of HMDs, hinders consumers from buying products and enjoying VR at home,” said Dillon Seo, CEO of VoleR Creative, a VR content maker, and former co-founder of Oculus.

However, the popularity of VR and AR games didn’t completely die down during the past year. The main reason was an increase in the number of places where Koreans could take advantage of the new technology outside of their own homes.

VR Plus near Gangnam Station in southern Seoul was Korea’s first VR room. The business launched in July last year and has 22 branches operating nationwide. The site has three rooms equipped with HMDs, consoles and screens where customers can enjoy the VR experience without having to buy their own equipment.

“The general level of interest in VR has grown thanks to operators like us, but still a majority of consumers visit to try VR for the first time. When a new industry emerges, it takes time for the public to embrace that technology. For now, I think it’s safe to say that we are at that stage,” said Kim Tae-hoon, the company’s marketing manager. There are now about 50 VR rooms in Korea.

Although only a year old, variations on VR rooms are already starting to appear. One realm expected to grow this year are venues offering VR pornography. Unlike normal VR rooms that provide a gaming experience, this new variety offers a more intimate space with a comfortable couch where visitors can watch VR videos.

Although the future of VR and AR games in Korea remains uncertain, there are still positive steps being taken.

Major companies and the government are increasing their investment in VR and AR - particularly after the success of Pokemon Go. Of course, there are no visible outcomes yet but the investment heralds positive change.

“Lotte World, for example, adopted VR headsets on some of its rides last year and is planning to expand it to other contents after finding out that it’s cheaper than establishing a new attraction and effective to bring in more consumers,” said Seo.

In February the government announced a plan regarding regulations for new technology, including VR and AR. “One difficulty VR and AR companies are facing is that there is no rules at all regarding the industry so we don’t know what rules we may end up violating,” said Song Chae-hoon, a director at Skonec Entertainment, a start-up that develops walking VR attraction games.

For example, guidelines for VR rooms didn’t exist, so operators in different regions had to follow different rules. The reform plan included measures to tackle the problem.

Apart from AR and VR, major companies are making moves to incorporate emerging technologies into entertainment.

On Friday, KT opened a hologram concert hall, K-Live, in Songdo City. This is the fourth K-Live concert hall established by the mobile carrier.

In mid-July, SM Entertainment and mobile carrier SK Telecom inked a strategic partnership to cross purchase stocks in each other’s subsidiaries. The match was intended to create synergy between SK Telecom’s technology - such as artificial intelligence - and SM Entertainment’s intellectual property and fan base.

“Both companies are respective leaders in ICT technology and entertainment,” the company said in a statement. “The convergence of ICT and entertainment content is expected to accelerate in the future.”