U.S. responds to ICBM test with flyby of two bombers

U.S. responds to ICBM test with flyby of two bombers 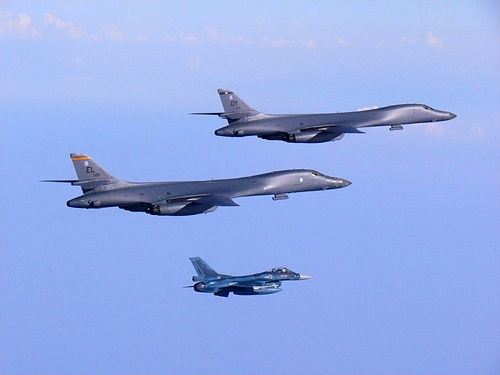 The two B-1B Lancers first made contact with Japan’s self-defense fighter jets, then flew over the peninsula, joined by South Korea’s F-15 fighter jets in a show of force, the U.S. Air Force said in a statement.

The U.S. military said it was a “demonstration of ironclad U.S. commitment” to its allies and that its aircrews “practiced intercept and formation training during the mission, enabling them to improve their combined capabilities and tactical skills.”

The mobilization of the two bombers came in the wake of Pyongyang’s ICBM launch on Friday night, which reached a height of 3,724 kilometers (2,313.9 miles) before falling into waters near Japan’s northern region. Experts say the North could now potentially hit California and even as far as Chicago.

“North Korea remains the most urgent threat to regional stability,” said Gen. Terrence J. O’Shaughnessy, Pacific Air Forces commander, in the statement by the U.S. Air Force. “If called upon, we are ready to respond with rapid, lethal and overwhelming force at a time and place of our choosing.”

Joined by South Korea’s fighter jets, the two U.S. bombers performed a low-pass over Osan Air Base in Gyeonggi before returning to Guam. The drill came just three weeks after the United States flew a pair of B-1B bombers over the peninsula on July 8 in response to North Korea’s firing of an ICBM four days earlier.

“I am very disappointed in China,” U.S. President Donald Trump said in a message on Twitter on Saturday(local time). “Our foolish past leaders have allowed them to make hundreds of billions of dollars a year in trade, yet they do NOTHING for us with North Korea, just talk. We will no longer allow this to continue. China could easily solve this problem!”

China currently keeps the North Korea’s economy afloat as a key source of trade and fuel. More than 90 percent of North Korea’s trade is with China.

But it remains to be seen how effective such financial measures will be. Former U.S. Secretary of State Henry Kissinger, a key player behind the opening of diplomatic relations between United States and China in the 1970s, said on Friday that the United States needs a new approach to China.

“I believe we have a better chance of getting to the nuclear problem with North Korea if we first come to an agreement with China about what follows after the collapse of the North Korean regime,” he was quoted as saying by The New York Times. Such an agreement, he added, should include an assurance by the United States that it will withdraw its forces from the peninsula once North Korea collapses.