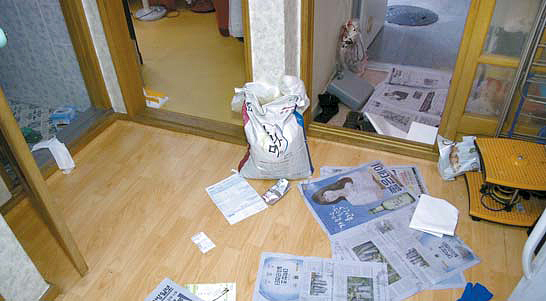 When police found the corpse of a 61-year-old man in Busan last month, they presumed he died of an illness in February. [SONG BONG-GEUN]

BUSAN - After receiving a call from a neighbor about a “rotting smell,” fire fighters arrived at an apartment in Busan earlier this month to find that the 49-year-old tenant surnamed Han had apparently died two weeks before.

He used to live with his mother, but she was admitted to a hospital for the elderly six months ago. Three months after that, he lost his job as a security guard. Police say he had depression, an alcohol problem and that he rarely left his home.

His cause of death was most likely malnutrition, according to police.

Han is one of 13 godoksa cases in Busan whose bodies were found in June and July days after they had died. Godoksa, or “lonely death,” refers to the death of a person who lives alone and whose body is found days later.

Over half the 13 cases above involved people who were 64 or younger, which is below the legal threshold for being a senior citizen in Korea, defying the common belief that godoksa cases are usually old people.

Four were in their 40s and 50s and nine were recipients of basic livelihood or basic pension funds, meaning they were in the lowest economic brackets. 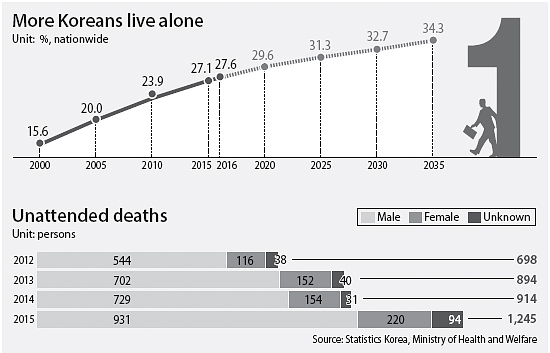 The government does not track cases of godoska, a relatively new term in Korea, but experts say the phenomenon is definitely increasing among middle-aged Koreans. Song In-joo, a researcher at the Citizen’s Solidarity for Social Welfare of Seoul, explained that some of the best data on godoksa cases is from a joint study by the public broadcaster KBS and the Korean National Police Agency, which noted 1,717 cases in 2013 and 162 in Seoul.

According to the World Bank, approximately 220,000 people died in South Korea in 2013, which means godoksa cases represented about 0.78 percent of all deaths that year.

Song blames the country’s social security network, which focuses on older adults, as the chief reason that so many godoksa cases involve middle-aged Koreans.

Last year, 27.6 percent of the national population lived alone, up from 23.9 percent in 2010 and 15.6 percent in 2000, according to data from Statistics Korea. The figure is projected to reach 34.3 percent by 2035. To tackle the issue, Busan’s Seo District is planning to expand their so-called “check in with a yogurt drink” service, which requires social welfare workers to visit low-income older adults who live alone every week with yogurt.