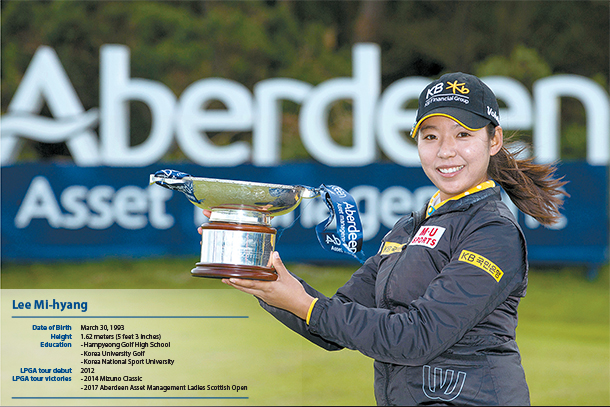 Lee Mi-hyang had one of the most impressive come-from-behind victories, overcoming six shots on Sunday to capture her first win of the season at the Aberdeen Asset Management Ladies Scottish Open at Dundonald Links in North Ayrshire, Scotland.

Getting to Scotland was a continuous struggle. First, she missed her connecting flight, which led her to arrive in Scotland a day later than others. Then with only two days remaining until the tournament, Lee’s golf clubs didn’t arrive.

When Lee got her clubs, she then had to play at a links course right by the shore with an average wind speed of 10 meters per second (22 miles per hour). Lee barely made the cut, shooting five over par in the first two rounds. After the second round, Lee was nine shots behind the leader.

“I think the first and second round was .?.?. I hit it really good, but I just missed a lot of putts,” Lee was quoted as saying on the LPGA website. “So I tried to practice my putting with the wind. I made a lot of putts yesterday, so I took a lot of confidence from yesterday.”

Starting in the third round, Lee played like a different golfer, shooting four under par, the lowest round of the day, in rainy and windy weather. But still, not many expected Lee to get to the top of the leaderboard, as she was six shots behind the co-leaders.

Lee continued her stride on the fourth and final round, quickly climbing up the leaderboard by shooting five under par just in the front nine, making six birdies and a bogey.

“It was really a surprise for me, and then just my front nine was amazing, and then I think I got a good start from my first hole,” Lee was quoted as saying on the LPGA website. “My back nine [was] a little up-and-down, but I made a lot of putts. I made a lot of good putts and a good chip shot, too. Just I think hole-by-hole, [it was] simple.”

It all came down to the par four 17th. Lee’s second shot went over the green, but successfully made an up-and-down for a par, while Karrie Webb of Australia made a double-bogey on the same hole by getting into the bunker twice.

Lee took a two-shot lead over Webb and as both players finished with birdies, Lee was declared this year’s Scottish Open Champion by one shot over Webb and Hur Mi-jung, finishing at five under par.

It was quite a long-awaited victory for Lee, who made her LPGA Tour debut in 2012 from the 2011 LPGA Tour qualifying school, as she hasn’t won a tournament since the Mizuno Classic in November 2014.

Though Lee earned her LPGA Tour card, she played mostly on the Symetra tour during her rookie season in 2013. By winning the Symetra Tour’s Rookie of the Year Award, she was able to retain her tour card for the following season.

Then in her second season, Lee won the 2014 ISPS Handa New Zealand Women’s Open of the Ladies European Tour and her first LPGA Tour victory at the Mizuno Classic in November.

After her first victory, Lee had multiple opportunities to win, but always came up short when it came to taking first place at a tournament. Along with a winning purse of $225,000, Lee also gained confidence for the upcoming Ricoh Women’s British Open at Kingsbarns Golf Links in Fife, Scotland starting on Thursday.

“It was a great practice before The Open,” Lee said. “I gained a lot of confidence and I hope to get to the top of the leaderboard once again.”