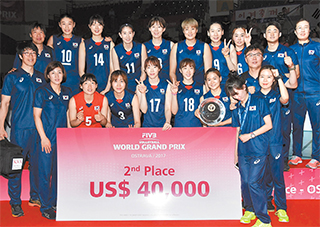 The Korean women’s volleyball team after finishing runner-up in Group 2 at the FIVB World Grand Prix in Ostrava, the Czech Republic, on Sunday. Although Korea won the first two matches, they lost 3-0 to Poland in the finals. [YONHAP]

The Korean women’s volleyball team finished second in Group 2 of the FIVB Volleyball World Grand Prix in Ostrava, the Czech Republic, on Sunday after losing 3-0 to Poland in the finals, but their performance demonstrated the team’s high potential.

Korea was the highest-ranked team in its group to advance to the finals, recording eight wins and one loss from three weeks of group matches. Prior to the final, Korea had a thrilling 3-2 victory over Germany on Sunday.

In two previous matches against Poland, Korea was dominant, winning 3-1 and 3-0 in the group stage, overcoming a significant height disadvantage. The Polish team had an average height of 1.83 meters (6 feet) against the Koreans’ 1.79 meters.

“We might have been exhausted after the semifinals, but we certainly didn’t display the skills we possess,” said Kim Yeon-koung, a hitter for the team. “Having beaten Poland twice in the group stage, the team we played against in the finals was different. Still, we gave our absolute best and are proud to have placed runner-up.”

Although Kim appeared tired during the match, she still managed to be the leading point scorer of the game with 15 points in the finals.

Despite the women’s team showing great talent, they have not had the opportunity to compete in many international tournaments. A budget shortfall at the Korean Volleyball Association locked the team out of the Grand Prix World Volleyball Tournament for the past two years. This absence meant that the Koreans, who originally competed against top-seeded teams in Group 1, fell to Group 2 this year.

Even worse, due to injuries, the team was short two players throughout their 11 games. “We tried to divide playing time between the 12 players evenly, but with long-distance travel and jetlag, everyone was exhausted,” Hong Sung-jin, the team’s head coach, said. “We played the first week in Bulgaria and the second week in Poland before returning to Korea to play the final week of the group stage. The team then traveled to the Czech Republic to play the final.”

The setter, considered the captain on court, also saw a complete generational chnage. Kim Sa-nee and Lee Hyo-hee, who had originally rotated as setter, were pulled out and replaced by Yeum Hye-seon and Lee So-la. The inexperienced duo appeared to struggle distributing the ball.

But in the semifinal match, Lee So-la turned around the team’s performance from 0-2 to 3-2. “When Lee So-la was substituted in as setter for the semifinals, the pace of the game completely changed,” Kim said.

The Grand Prix is the Korean team’s first big tournament in the lead-up to the 2020 Tokyo Olympics. They’re hoping to produce a strong international record to elbow their way into the Summer Games.

To gain crucial playing experience, the team is scheduled to compete in three more international volleyball tournaments this year.