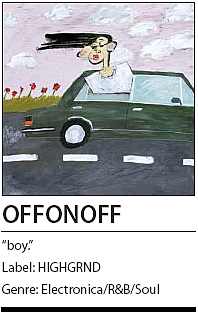 Although many an artist rose to prominence from music-sharing platform Soundcloud in foreign waters, there hasn’t been much of that breed in Korea - until now. Duo offonoff, consisting of Colde and 0channel, have been one of the first acts to rise from a sea of unfinished mixtapes and singles.

The duo is part of hip-hop crew Club Eskimo, which includes now-famous Crush, Dean and Punchnello among many others.

After releasing the Soundcloud-only album “mood.” in August 2015 to a small but avid audience, the group has gained a respectable following.

Their first commercial album is 12 tracks of dreamy instrumentals and vocals with featured verses from members under the Highgrnd label. The track “gold,” featuring a guest verse from R&B singer Dean, is no doubt the standout song from their commercial debut.

The two lead tracks “boy” and “Dance” sum up the duo’s musical directions - dreamy and soothing with restricted emotions.

Most of their songs have a beautiful visual to them, which is worth checking out on YouTube along with the music.