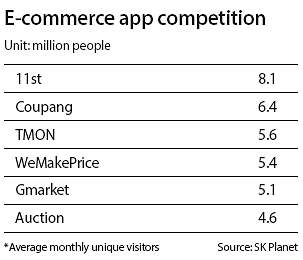 11st, an e-commerce platform operated by SK Planet, posted a record transaction amount of 4.2 trillion won ($3.7 billion) in the first half of this year, with much of the activity occurring on its mobile platforms.

The transaction amount represents a 10 percent jump from the first half last year, the company said Monday, and a 52 percent increase from two years earlier.

By comparison, in 2012, 11st posted a yearly transaction amount of 4.6 trillion won.

SK Planet credited its “mobile first” strategy for the result. In the second quarter, mobile shopping overtook computer to reach 61 percent of transactions for the first time.

“It means digital shopping at 11st has shifted from PC to mobile,” the company said.

SK Planet’s mobile services include a chatbot that helps customers shop online and automatic membership renewal for mobile users. Starting in May, 11st users have also been able to pick up items purchased online at select CU convenience stores.

Earlier this month, 11st launched a service that allows repeat customers of baby formula to reorder pre-selected products with the push of a button.

On the back of such services, the company said, it was able to achieve the highest number of average monthly unique visitors to its mobile app in the first half of the year.

11st recorded a monthly average of 8.1 million unique visitors, according to Nielsen Koreanclick, which measures app traffic. It was followed by Coupang with 6.4 million and TMON with 5.6 million.

SK Planet said 11st’s operating loss in the second quarter went down by 60 percent compared to the same period last year. The company, which also operates diverse mobile payment services, recorded an operating loss of 360 billion won last year, half of which is known to have been generated from 11st. The exact figure for the loss from 11st was not revealed.

“11st recorded the highest transaction amount last year and is continuing the momentum this year as well,” said Jang Jin-hyuk, executive vice president at 11st’s business division. “We will continue our effort in differentiating our product portfolio to enhance customer value and continue healthy growth.”