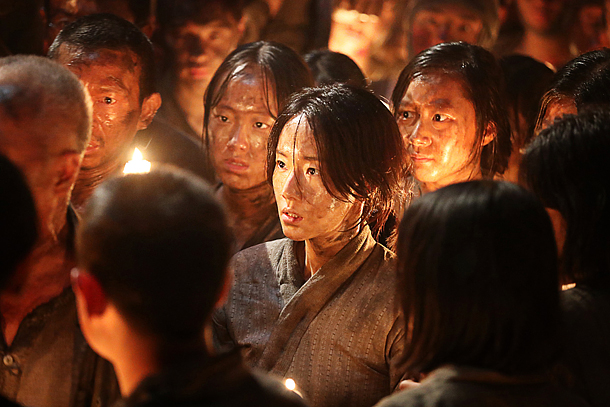 Despite concerns that it dominated at too many screens, the controversial period epic “The Battleship Island” smashed Korea’s weekend box office. [CJ E&M]

As expected, the controversial “The Battleship Island” stormed Korea’s box office on its debut weekend. The newly-released “Despicable Me 3” was not even close in the competition.

From Friday to Sunday, the fictionally recreated period epic “The Battleship Island” sold 2.51 million admissions at 2,019 screens, adding on to a total of 4.07 million tickets sold as of Monday, since it hit theaters less than a week ago. It accounted for 62.8 percent of the entire weekend ticket sales, raking in 20.84 billion won ($18.6 million).

The period epic, starring Hwang Jung-min, So Ji-sub and Song Joong-ki, has been at the center of attention for dominating more than 80 percent of screens. The CJ E&M-distributed movie opened at the highest number of screens in the country on Wednesday with 2,027 out of the entire 2,575 screens nationwide, once again raising the issue of conglomerate’s monopoly of the local film market.

The movie, directed by “Veteran” (2015) director Ryoo Seung-wan, depicts the lives of Koreans who were subject to forced labor in Hashima Island, otherwise known as Battleship Island for its warship-like appearance, during the period of Japanese colonial rule (1910-45).

Universal Pictures and Illumination’s third chapter of the “Despicable Me” series landed in a distant second place with 850,000 admissions sold, taking up 20 percent of weekend ticket sales. The movie, starring supervillain-turned-crime fighter Gru and his suppository-shaped yellow henchmen, sold 852,000 tickets since it was released nationwide on Wednesday. The newest installment of the franchise adds an interesting new character, Gru’s long-lost twin brother named Dru.