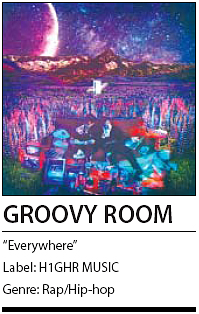 Young and talented would be the best way to describe Lee Hwi-min and Pak Gyu-jeong, the two 24-year-old male artists of Groovy Room. The duo recently dropped their first EP “Everywhere,” in which they collaborated with some of the hottest musicians on the current hip-hop scene. Despite their young age, they have both been active in both underground and mainstream music, working with some of the big names in hip-hop such as Mad Clown, Jay Park, Dynamic Duo, and Gary.

The title track of the seven-track album featuring Heize and Jay Park, “Sunday,” feels like the sort of conversation that a couple would usually have, with the lyrics “I can smell the scent of alcohol hidden in the scent of your Jo Malone perfume.”

The track “Someday” has a reggae vibe, which gives a summer feeling to the album.

The last track of the album featuring Ailee and Dok2, called “Loyalty” is the kind of typical song that Ailee would sing, with the powerful and confident lyrics, “I’m not your average girl. You better treat me like a lady.”