Gov’t does somersaults over Thaad deployment

Gov’t does somersaults over Thaad deployment 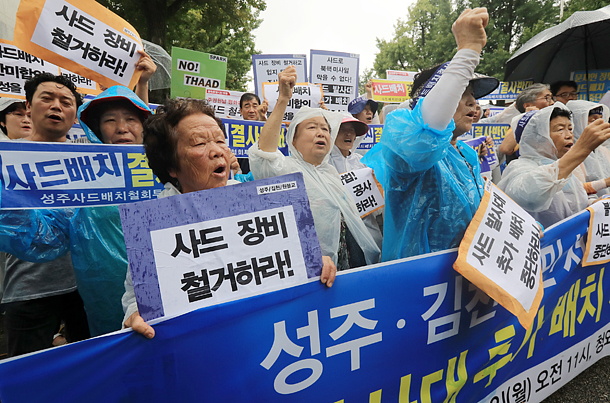 Residents of Seongju and Gimcheon, North Gyeongsang, stage a rally near the Blue House on Monday to protest the order by President Moon Jae-in to discuss the deploying of additional Thaad launchers with Washington. [YONHAP]

South Korea’s National Defense Ministry announced Monday that discussions with the United States have begun on the “temporary deployment” of four additional mobile launchers for the Terminal High Altitude Area Defense (Thaad) system, which would technically complete a full Thaad battery - but the minister said hours later that even that decision can be “reconsidered if the local public expresses fear.”

Moon Sang-gyun, the ministry’s spokesman, said during a regular press briefing Monday morning that the two countries will decide together whether to deploy four more launchers, but didn’t mention by when or how a conclusion will be reached.

If Seoul and Washington do decide to deploy additional launchers, the delivery process will be “transparent,” Moon stressed when asked whether the military would carry out an unnoticed, late-night operation like the one done by the former Park Geun-hye administration.

The ministry’s announcement was made two days after President Moon Jae-in ordered his aides during a National Security Council meeting to start discussions with their U.S. counterparts on deploying four additional launchers in Seongju County, North Gyeongsang, some 300 kilometers (186 miles) south of Seoul.

The meeting was held in the wake of North Korea’s launch of an intercontinental ballistic missile (ICBM) Friday night.

During a parliamentary briefing on Monday afternoon for lawmakers on the National Defense Committee, Defense Minister Song Young-moo said he personally recommended the full deployment of Thaad to Moon during the National Security Council meeting, after which Moon decided to operate them temporarily.

But in pinning down the administration’s definition of temporary, Song said the South Korean government could “reconsider” them if the public expressed fear.

Two Thaad launchers are currently operational in Seongju, while four more are stored on a U.S. military base. A Thaad battery is composed of six truck-mounted launchers, 48 interceptors, a fire control and communication unit and an AN/TPY-2 radar. 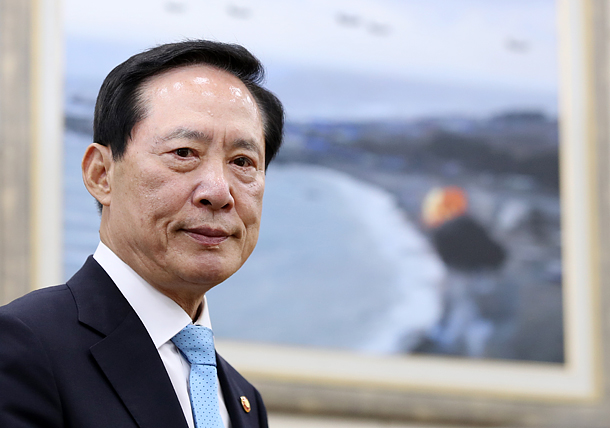 Defense Minister Song Young-moo on Monday at a meeting of the National Defense Committee, where he gave a briefing on North Korea’s Hwasong-14 missile launch. [YONHAP]

Moon’s push for Thaad on Saturday was made merely 15 hours after the Defense Ministry said on Friday morning it would expand a so-called environmental impact assessment of the missile shield, delaying initial deployment plans by nearly 10 to 15 months.

Moon’s predecessor, who signed the deal with Washington last summer, originally said that Thaad would be fully operational by the end of this year.

The Blue House, sandwiched between Washington and China - which vehemently opposes the Thaad deployment - said last Friday that the government would decide whether to deploy the antimissile system based on the results of the environmental assessment, but ironically followed up by stressing there was no way Seoul will scrap the deal.

The presidential office said Monday that the environmental test would continue as planned regardless of the four temporarily deployed launchers, and that the result will affect whether or not South Korea will make way for a full deployment.

Meanwhile, a senior Blue House official said Monday that Moon was expected to speak with U.S. President Donald Trump over the telephone once he returns from his vacation next week. A similar conversation with Japanese Prime Minister Shinzo Abe is expected to take place around the same time, the official added, providing fresh fodder to the opposition bloc, who accused Moon of being lackadaisical in the face of North Korea’s threats.

Trump and Abe spoke for about 52 minutes via telephone at 8 a.m. Monday, local time.

The Blue House source brushed off the criticism, suggesting that the decision for Moon to take a vacation was part of psychological warfare with Pyongyang.

“What’s really important is how well the president responds [to an issue] and how cohesively he’s formed a response system to it,” said the official, adding, “Our system enables the president to exercise supreme command any time.”

Had Moon canceled his vacation, the source continued, it would’ve sent the wrong impression that the South Korean government was maneuvered by the North.