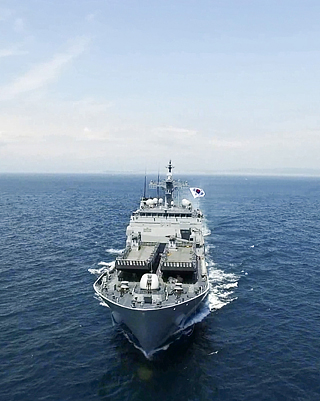 A next-generation landing ship capable of transporting more troops and military hardware than existing vessels will be delivered to the Navy this week, the state arms procurement agency said Monday.

The Cheonjabong, which will be delivered Tuesday, is the Navy’s second LST-II ship acquired under the next generation landing ship project that calls for building a total of four such ships by 2018. The first ship, the Cheonwangbong, was delivered to the Navy in November 2014.

The 4,500-ton Cheonjabong can transport more troops and hardware further away at a faster speed than the existing Gobongjun-class (LST-I) ship. It can travel at a maximum speed of 23 knots per hour with a total of 130 crew members, according to the Defense Acquisition Program Administration.

Built by Hyundai Heavy Industries since December 2013, the new ship has already completed a test run and undergone a state quality test. It will be deployed after about four months of crew training and familiarization.

The vessel is 120 meters long (394 feet), 19 meters wide and armed with a 40 millimeter gun and a system designed to protect against guided missiles.

“When the Cheonjabong is deployed, it will play a key role, together with the first ship Cheonwangbong, as the main landing ships of the Navy,” Lee Jae-dong, an official of the procurement agency, said. “It will carry out not only landing operations, but also a variety of other missions in wartime, and is expected to contribute to peacekeeping operations in peacetime.”