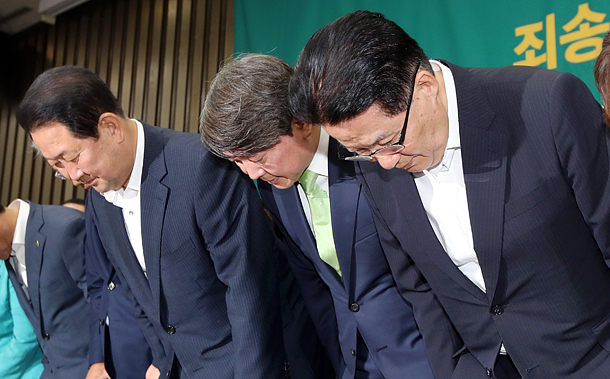 Prosecutors on Monday cleared senior members of the People’s Party of suspicions that they might have been involved in an illegal smear campaign against the Moon Jae-in camp at the height of the presidential race in May.

Announcing the outcome of its investigation into the release of a fake audio tape and screen shots of a group chat that concerned Moon’s son, the Seoul Southern District Prosecutors’ Office said it found no evidence that the party’s senior members, such as its former leader, Park Jie-won, party nominee, Ahn Cheol-soo, and Rep. Lee Yong-ju, were involved in the making and spreading of false information to smear the Moon camp.

Prosecutors, however, indicted without physical detention former lawmaker Kim Seong-ho and lawyer Kim In-won on charges of spreading false information. The prosecutors said the two violated election law by allowing the fake evidence to go public without properly examining their veracity. The two were senior aids for the Ahn Cheol-soo camp during the race. Wrapping up its investigation, prosecutors indicted five suspects, but did not bring charges against any incumbent party lawmakers, saying they did not find “evidence” linking them to illegal conduct.

On Rep. Lee Yong-ju, who headed the campaign committee in charge of vetting critical reports against Moon, prosecutors said when the fabricated material was reported to the campaign headquarters by Lee Jun-suh, another senior campaign official who was tipped off by Lee Yu-mi, a party member, Lee had practically stepped down from his post in the committee.

“It is hard to say Lee let the fake evidence go public while knowing they were fake,” said the prosecution.

The fake audio tape scandal dates back to April 27, when Lee Yu-mi reported to Lee Jun-suh that she knew someone who went to the Parsons School of Design in New York with Moon’s son, Joon-yong, who could prove the son landed a coveted public sector job because of his father’s senior position at the Blue House. Sensing the explosiveness of the matter if made public, Lee Jun-suh, a close aid to Ahn Cheol-soo, demanded a transcript of such testimony.

On April 30, Lee Yu-mi, a CEO of a local startup company, gave the official screen shots of a group chat in which she alleged she spoke to two of Joon-yong’s friends from Parsons. In the chat, one person says Joon-yong had talked about getting a “free pass” into the Korea Employment Information Service (KEIS). It was later revealed Lee Yu-mi typed all three parts in the chat using three different mobile phones.

On May 3, Lee Yu-mi also handed over an audio tape in which a voice claims that during his time at Parsons he was a friend of Joon-yong’s and that Joon-yong was hired at KEIS because of his father’s influence. It turned out the voice actually belonged to Lee Yu-mi’s brother, who has since been indicted by prosecutors.

The People’s Party can now breathe a sigh of relief as prosecutors cleared its ranking lawmakers. The party has insisted that Lee Yu-mi acted alone and that none of its senior members knew the materials were fake when the party used it to criticize the Moon campaign on May 5, four days before Election Day.

“Now it is officially proven that the party did not systematically involve itself in the scandal,” said party floor leader Kim Dong-cheol during a party member meeting convened in response to the prosecutors’ briefing. “But we can’t excuse ourselves for having failed to properly examine the fake material or for our lack of caution. We must strive for profound reform.”

Joined by Ahn Cheol-soo, who founded the party and ran as its presidential nominee, party lawmakers bowed their heads in contrition at the National Assembly, promising to never allow such a failure to occur again.

Ahn made his first public appearance in 19 days after he apologized to the public over the scandal. While he said at the press briefing on July 12 that he would spend time in self-reflection, he did not say he would retire from politics as a way of taking responsibility. Emerging from its biggest political scandal, the nation’s third-largest party will have its party convention to elect a new leader on Aug. 27.