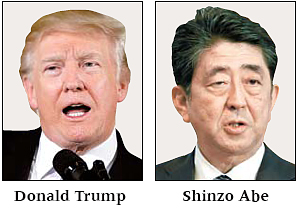 Washington has warned that the time for dialogue with North Korea is over, upping its pressure on Beijing following Pyongyang’s latest intercontinental ballistic missile (ICBM) launch.

“The time for talk is over,” U.S. Ambassador to the United Nations Nikki Haley said in a statement Sunday as she called on China to do more to counter North Korea’s aggressions. “The danger the North Korean regime poses to international peace is now clear to all.”

Her remarks came after North Korea late Friday tested a more advanced version of the Hwasong-14 missile, which it tested on July 4.

“An additional Security Council resolution that does not significantly increase the international pressure on North Korea is of no value,” Haley said. “In fact, it is worse than nothing, because it sends the message to the North Korean dictator that the international community is unwilling to seriously challenge him.”

She added that, “China must decide whether it is finally willing to take this vital step.”

While the United States has usually called for an emergency session of the Security Council after North Korea’s provocations, Haley claimed there is “no point” if it “produces nothing of consequence.”

Washington has been pushing for a stronger sanctions resolution in the 15-member council, which has faced some resistance by veto-wielding countries China and Russia, who have traditionally backed the North.

Haley also urged Japan and South Korea to increase pressure on North Korea, adding it is not just a U.S. problem but would require an international solution, in a Twitter message on Sunday.

Her tweet read: “Done talking about NKorea.China is aware they must act.Japan & SKorea must inc pressure.Not only a US problem.It will req an intl solution.”

U.S. Vice President Mike Pence echoed a similar message pressuring China and Russia while visiting Estonia, the first leg of an Eastern Europe trip, emphasizing that all options are on the table for Washington.

“The continued provocations by the rogue regime in North Korea are unacceptable and the United States of America is going to continue to marshal the support of nations across the region and across the world to further isolate North Korea economically and diplomatically,” Pence said in Tallinn, capital of Estonia.

He repeated that the “era of strategic patience is over,” and said that Trump “is leading a coalition of nations to bring pressure to bear until that time that North Korea will permanently abandon its nuclear and ballistic missile program.”

Pence also said that Trump has been clear in his conversations with Chinese President Xi Jinping that “while China has taken unprecedented steps to begin to isolate North Korea economically and to bring diplomatic pressure, we believe China has a unique relationship with the regime in North Korea and has a unique ability to influence decisions by that regime.”

He added that Trump emphasized that Washington calls on Beijing “to use that influence along with other nations in the region to encourage North Korea .?.?. to embrace a nuclear-free Korean Peninsula and abandon its provocative actions and its ballistic missile program.”

Pence also said, “The president and I remain very hopeful that we’ll see different behavior by the Russian government, with regard to Ukraine, with regard to supporting rogue regimes in Iran and North Korea,” referring to the latest package of bills passed by the U.S. House and Senate sanctioning the three countries.

In two messages posted on Twitter Saturday, Trump said that he is “very disappointed in China,” claiming that “they do NOTHING for us with North Korea, just talk. We will no longer allow this to continue.”

In a phone call on Monday, Trump and Japanese Prime Minister Shinzo Abe discussed the North’s latest ICBM launch and “committed to increasing economic and diplomatic pressure on North Korea, and to convincing other countries to follow suit,” the White House said in a statement.

Abe told reporters afterward that North Korea “has unilaterally escalated the situation” despite efforts to resolve the issue in a peaceful manner. He added, “The international community, starting with China and Russia, must take this obvious fact seriously and increase pressure.”

Diplomatic sources have indicated that a U.S. draft resolution in the Security Council calls for a prohibition of crude oil sales to North Korea, the placement of leader Kim Jong-un on the sanctions blacklist and a ban on travel to North Korea.

However, China and Russia have been wary of unnecessarily strong sanctions on the North, warning this could lead to a backlash.

Russian Deputy Foreign Minister Sergei Ryabkov said in an interview with ABC’s “This Week” Sunday, “We are in the process of discussing a draft resolution for the UN Security Council that would take further measures, and we are prepared to do so, but this resolution should not equate measures that are targeted on stopping the illegal activities of Pyongyang in the area of nuclear weaponization and missile developments, to the economic suffocation of the whole country.”

South Korea’s Foreign Ministry said Seoul will take “firm responses, including the adoption of a UN Security Council sanctions resolution.” Kang said the North’s latest provocation was “very disappointing and reckless” as it comes as the South Korean government and the international community has pushed for humanitarian exchanges and an easing of tensions.

Washington has prioritized the diplomatic route and increased economic pressure, but it has also kept open the option of military action. However, many U.S. officials and congressmen have warned of the possible catastrophe that military action on the North could bring about, including Defense Secretary James Mattis on many occasions.

The U.S. Air Force deployed two B-1 supersonic bombers from Guam to the Korean Peninsula on a 10-hour mission on Sunday, which teamed up with South Korean and Japanese fighter jets in response to the North’s ICBM launch.

The Thaad interceptor was launched by a U.S. Air Force C-17 Globemaster III strategic airlifter from the Pacific Spaceport Complex Alaska in Kodiak, Alaska, according to the MDA.

MDA Director Lt. Gen. Sam Greaves said in a statement, “In addition to successfully intercepting the target, the data collected will allow MDA to enhance the Thaad weapon system, our modeling and simulation capabilities, and our ability to stay ahead of the evolving threat.”

This marks the 15th successful intercept in 15 tests for the Thaad system, according to the MDA.