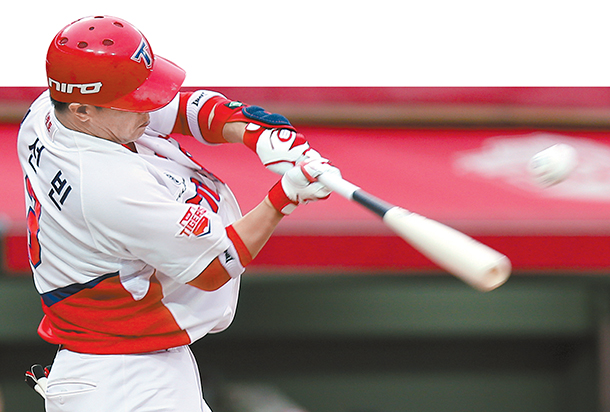 Kim Sun-bin of the Kia Tigers, the KBO’s highest ranked player by batting average, compensated for his short stature by completely changing his batting style.[YONHAP]

At home plate, Kim Sun-bin of the Kia Tigers crouches down and stands as close as he can to the catcher. Sometimes Kim crouches so low that he is the same height as the catcher. Despite Kim’s short stature, standing at only 1.65 meters tall (5 feet 4 inches), he is ranked first in the KBO’s batting average at 0.378 as of Monday.

There were times when Kim, known as the “Little Giant” lost his top spot to the bigger batters, Lee Dae-ho of the Lotte Giants or Choi Hyung-woo of the Tigers, but for the majority of the 2017 season, Kim has maintained his lead.

Shorter batters tend to stand tall when batting, but Kim bends down as much as he can and this seems to help him make big hits. During the Tigers’ game against the SK Wyverns on July 25, Kim’s two-run home run at the bottom of the ninth showed a significant change in his batting form.

“He has the ability to make great contact with a baseball,” Park Heung-sik, the Tigers’ batting coach, said. “As a shortstop, a batting average above 0.290 is considered good, but rather than being satisfied with good, Kim worked harder to make improvements and is now one of the KBO’s top batters.” 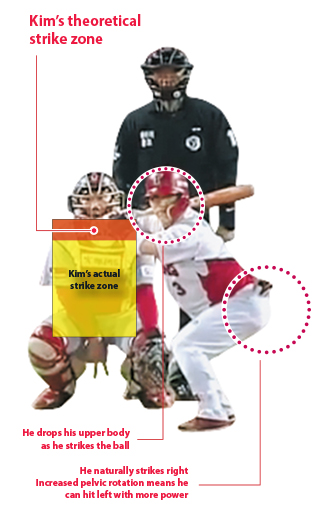 When Kim joined the Tigers in 2008, he was known more for his defensive skills than offense. In the batter’s box his performance was just enough to get him into the starting lineup.

But after serving on the military’s Sangmu Baseball team, which he joined in 2015, he returned to the KBO a different man.

Since Sangmu is in the Futures League there was less pressure on results and Kim was able to experiment with different batting forms.

“While I was in Sangmu Baseball team, I learned how happy a thing it is to be playing in front of the fans,” Kim said. “And after marriage, I now have bigger responsibilities.”

“One time, he couldn’t walk properly due to sore legs after training,” Park said. “Once the basic physical strength training was done, I made him strengthen his pelvis, to improve pelvis rotation.”

Thanks to his stronger lower body and pelvis rotation, Kim was finally able to make longer hits. Kim new swing belies his height, hitting the ball at least as far as any of the KBOs taller players. But Kim didn’t just change his approach to his more home runs.

In the 2012 season Kim hit five home runs in 126 games, his personal best. So far this season he has hit three home runs in 96 games as of Monday. Although his home run rate has actually dropped slightly, his slugging average has shown significant improvement from 0.367 in 2012 to 0.491.

One of the biggest weaknesses of Kim’s new swing is that his lower stance has put him directly in the firing line. To overcome his fear of getting hit, Kim started wearing a C-flap helmet.

A bigger problem is the strike zone. The normal strike zone in the KBO is considered from a batter’s shoulder to their belt, but umpires don’t always follow this. For Kim, it is difficult to connect with a pitch thrown higher due to his height and stance.

“It is hard to hit off of high fastballs. I feel like the falling point of the curve is higher than my height,” Kim said.