Shin Tae-yong, the Korean men’s football coach, is looking to call up China-based national players early for upcoming World Cup qualifiers as he plans to visit the neighboring country later this week.

Shin, who took the helm of the men’s senior squad last month, will travel to China with his assistant Kim Nam-il on Friday to check on the Korean players there, according to a Korea Football Association (KFA) official Tuesday. The 46-year-old head coach will watch the Chinese Super League (CSL) match between Guangzhou Evergrande and Tianjin Teda on Saturday, which may feature Korean defenders Kim Young-gwon for Guangzhou and Hwang Seok-ho for Tianjin. 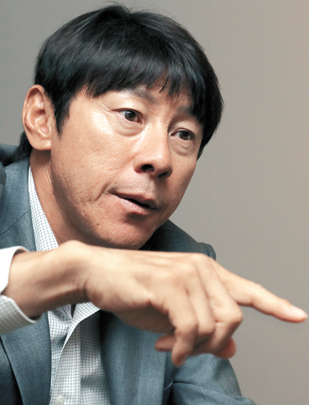 Shin’s side last week received approval from the Korean pro football league office to summon the national players one week earlier than scheduled. With the K-League’s green light, the national team will be able to start training on Aug. 21. Shin will announce his first national team roster on Aug. 14.

The CSL will take an international break after Aug. 20 as China also needs to prepare for their World Cup qualifiers. Both Korea and China are in Group A in the final Asian qualifying round for the 2018 FIFA World Cup.

“Although we have yet to make an official request to the Chinese Football Association, Korean players can join the national team training starting Aug. 21 if they can get approval from their clubs,” a KFA official said. “Previously, former Guangzhou R&F player Jang Hyun-soo joined the national team early ahead of the World Cup qualifier against Qatar.”

Korea are scheduled to host Iran on Aug. 31 and face Uzbekistan in Tashkent on Sept. 5 for the finale. The Taeguk Warriors are currently holding on to the final automatic qualification spot with 13 points, sitting just one point up on Uzbekistan in second place in Group A.

In Asia, the top two teams from Groups A and B can advance directly to the World Cup in Russia. Two third-place teams must go through a playoff for their final chance.

Shin previously said he will pick more than 10 players from Korea’s K-League, but if CSL-based national players are available for early call-ups, he may bring more players from China, such as winger Hwang Il-soo, defender Kim Kee-hee, and midfielders Jung Woo-young and Kwon Kyung-won.