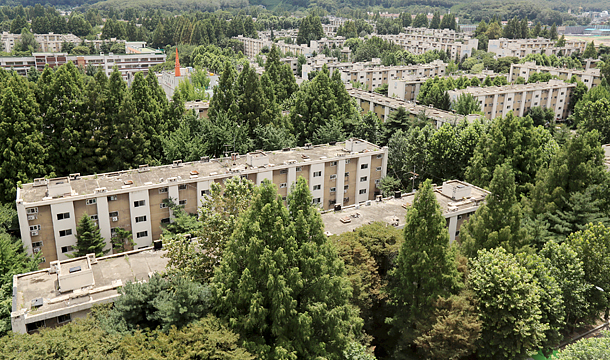 A view of an apartment complex in Gaepo-dong, southern Seoul, where the market is heated. Real estate transactions in Seoul reached an all-time high in July, according to the Seoul Metropolitan Government on Tuesday, a day before the central government is set to unveil measures aimed at cooling the market. [YONHAP]

The number of real estate transactions in Seoul reached 14,564 in July, according to the city government on Tuesday, the highest monthly figure since the government began compiling the data in its current form in 2006.

The statistic is particularly alarming because summer is usually considered an offseason for buying. The continuous demand for property has sent apartment prices in the Korean capital skyrocketing. Prices rose an average 0.57 percent last week compared to the previous week, according to the real estate information provider Budongsan 114, making it the highest weekly gain so far this year.

As a result, the central government plans to announce a set of measures later today aimed at cooling the real estate market.

Earlier in June, the government imposed stricter loan regulations in real estate hot spots including Busan, Sejong, Seoul and several cities in Gyeonggi Province. The maximum loan-to-value ratio, the percentage that a loan takes up in relation to the property value, was lowered to 60 percent from 70 percent. The maximum debt-to-income ratio, the percentage of a borrower’s income that goes toward paying debt, was lowered to 50 percent from 60 percent.

The measures were not enough to discourage the market.

The problem has become so persistent that President Moon Jae-in jokingly told his finance minister last week that he would buy him pizza if he could come up with policies that can put a lid on rising home prices.

“Breaking earlier projections that the real estate market’s upswing will lose its momentum after the June 19 real estate measures were announced, Seoul apartment prices have been rising fearlessly,” said Kim Eun-seon, a researcher at Budongsan 114. “Buying forces have started to busily search for apartments on sale in hopes of buying before the government announces household debt measures later in August, while those on the sidelines have started to jump in over concerns that apartment prices could further go up.

“On the other hand,” the researcher added, “those hoping to sell their apartments have started to retract their offers [hoping for the price to go up], which has made apartments in major complexes scarce.”

Since the market has shown little response to the government’s initial measures in June, the Moon administration has prioritized cooling the real estate market over tackling the country’s household debt problem.

Many in the real estate industry expect the new measures to target owners of multiple homes and designate certain areas as sites of real estate speculation, which means they will face tougher loan regulations, with maximum ratios as low as 40 percent. These areas are expected to be the popular southern Seoul districts of Gangnam, Seocho, Songpa and Gangdong.

The last time Gangnam, Seocho and Songpa were cleared of this designation was the end of 2011.