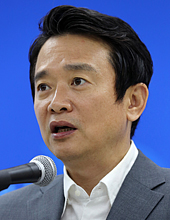 Gyeonggi has topped the central government’s administrative assessment for the second time in a row. The provincial government reported last Thursday that it earned As in eight of the nine policy fields - including general administration, social welfare, regional economy, environment and public safety - surpassing all 16 other metropolitan cities.

Trailing Gyeonggi was North Chungcheong, which won five As.

The only area Gyeonggi did not get an A in was regional development planning, while it managed to win As in all other eight assessment areas.

“The No. 1 position in the joint assessment is the outcome of close coordination for efficient administration among 31 cities and counties in the province,” said the Gyeonggi government in a press release issued Thursday. It went on to note that this was its second time, citing efforts to improve on administrative areas that were rated as “not top quality” in the previous assessment.

Specifically, it managed to win an A for public safety, for which it received a C last year. It attributed the upgrade to the increased number of people in the province, especially farming areas, who subscribed to insurance for floods and typhoons.

“Compared to the last year,” it said, “the number of people insured for such natural disasters went up by 40 percent.”

Gyeonggi has by far the largest number of residents, a whopping 12.7 million, about two million more than Seoul’s 9.9 million. The combined number of residents in Seoul and Gyeonggi comprise about 43 percent of South Korea’s total population of 51 million.

Gyeonggi Governor Nam Kyung-pil praised his government’s achievement, saying it is a “testament to its effective and convenient administrative functioning.”

He added, “As we have carried out coalition governing by tirelessly communicating with the provincial assembly and other cities and counties, the Gyeonggi government achieved a feat that it never has in its history.”

When he took office after wining a local election in June 2014, Nam was credited with introducing the coalition governing system, under which he sought cooperation and advice from those from different party lines, which he continues to do with less than a year left in his first term.

With the local election less than a year away, it remains to be seen whether Nam will run for a second term. Nam, who has an image as a reform-minded politician, ran in the Bareun Party primary for presidential nomination earlier this year but lost to Yoo Seong-min, who came in fourth in the May 9 election.