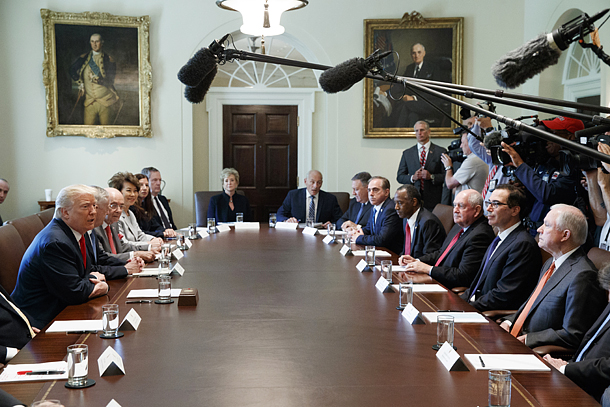 U.S. President Donald Trump, left, speaks during a cabinet meeting at the White House in Washington, D.C. on Monday. [AP/YONHAP]

The U.S. Department of Defense said Monday it is ready to resume deployment of the Thaad system as quickly as possible.

Pentagon spokesman Navy Capt. Jeff Davis told reporters in Washington Monday, “We are certainly ready to bring additional pieces in as quickly as we can.”

Davis reiterated that Thaad is “strictly a defensive weapon system,” aimed at intercepting ballistic missiles inside or outside the atmosphere during their final, or terminal, phase of flight.”

Davis described North Koreans as being “far better spokespeople” for the necessity of the Thaad system, adding “they are making the case for us rather effectively.”

“Our commitment to the defense of our allies, [South] Korea and Japan, in the face of these threats, remains ironclad,” he added, as the Pentagon over the weekend deployed nuclear-capable bombers to the Korean Peninsula with the support of the two allies’ Air Forces. It also successfully tested a Thaad interceptor in Alaska.

He did not elaborate on how and went onto blame previous administrations for the North Korea and Middle East crises.

“I am very disappointed in China,” Trump wrote over back-to-back Twitter messages Saturday. “Our foolish past leaders have allowed them to make hundreds of billions of dollars a year in trade, yet they do NOTHING for us with North Korea, just talk.”

China is growing testy at Washington’s pressure to rein in Pyongyang’s nuclear and missile provocations.

“We believe that the North Korea nuclear issue and China-U.S. trade are two issues that are in two completely different domains,” Qian said at a press briefing Monday. The issues “are not related, and should not be discussed together,” he said.

“The Chinese Foreign Ministry, ahead of protesting North Korea’s missile launch, summoned Ambassador Kim right after South Korea announced the deployment of the Thaad launchers, as if they had been on standby,” the source said. “This demonstrates what China prioritizes.”

On Monday, South Korea’s Ministry of National Defense announced that discussions with the United States have begun on the “temporary deployment” of four additional mobile launchers for the Thaad system.

A Thaad battery typically has six launchers equipped with eight interceptor missiles, and two launchers are currently operational in Seongju County, North Gyeongsang. The Moon administration, upon launching in May, had delayed the deployment of the other four launchers until a proper environmental impact assessment is conducted.

Thus, Moon’s latest order to resume deployment is a turnaround from the government’s initial plans to hold an environmental impact assessment of the system, which could have delayed initial deployment by up to 15 months.

For the first time since Moon took office, China’s official People’s Daily reported Tuesday a detailed account of the protests of Seongju area residents over the Thaad deployment.

The nearly half-page report published in its international section shows a photo of the protests by Seongju and nearby Gimcheon residents, detailing a rally against Thaad that took place Monday near the Blue House in Seoul.

A video clip was included with the online edition of the article.

A similar English-language piece was released by Xinhua News Agency Monday, describing protests over Thaad near the Blue House and the South Korean Defense Ministry. The article said, “The DPRK’s ICBM is not a direct threat to the South Korean territory as an ICBM has a range of at least 5,500 km [3,417 miles] ,” in reference to the Democratic People’s Republic of Korea.

Some observers point to such reports being a possible signal that Beijing plans to bolster economic retaliations against Seoul.

Such a pattern would be in line with China’s response after Seoul and Washington reached a decision to deploy the U.S.-led Thaad system to Korea in July 2016.