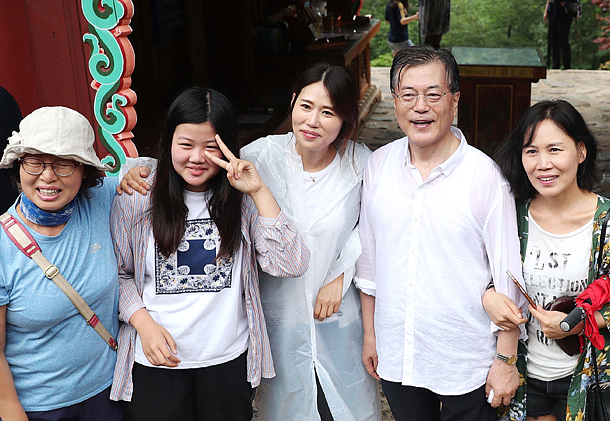 President Moon Jae-in, second from right, poses with tourists whom he encountered on the way to hiking on Mount Odae, Pyeongchang County, Gangwon, on Monday. Moon is taking his first summer vacation as president. [YONHAP]

While President Moon Jae-in is enjoying his first summer vacation as president, senior officials for the National Security Office are staying at the Blue House due to North Korea’s latest military provocation last Friday.

Moon left for Pyeongchang, Gangwon, on Sunday to begin his five-day break, just a day after he convened an emergency meeting of the National Security Council in direct response to Pyongyang’s intercontinental missile launch at 11:41 p.m. Friday. Moon was originally scheduled to begin his vacation on Saturday, but delayed it in the wake of the North’s ICBM launch.

Following Moon’s lead, Jun Byung-hun, senior presidential secretary for political affairs, Park Soo-hyun, the Blue Hose spokesman and Cho Hyun-ock, senior secretary for personnel affairs, also have been enjoying their first summer vacation under the Moon government, which was inaugurated on May 10.

“Because the president’s chief of staff Im Jong-seok has to fill in for Moon at the Blue House (during Moon’s break), I decided to take a break alongside Moon,” Jun was quoted as saying by the JoongAng Ilbo. “I will return with a fresh mindset as recent months have been hectic over the supplementary budget bill passage and cabinet member appointments.”

But Chung Eui-yong, head of the NSO, and Yi Sang-chul, first vice chief of the NSO, are staying at the Blue House along with other NSO officials, many of whom cancelled their vacations in the aftermath of the North’s Friday launch. It is unclear when the NSO chief and officials will have their break, since Moon is scheduled to have a phone conversation with his U.S. counterpart Donald Trump upon his return on Saturday. The two leaders are likely to discuss how to address the North’s latest provocation.

The opposition continued on Tuesday to criticize Moon’s decision to take time off, saying it was inappropriate amid the heightened tension with the North. The Bareun Party’s senior members condemned Moon, pointing out that Japanese Prime Minister Shinzo Abe and Trump spent nearly an hour over the phone discussing how to respond to the North’s launch.

“President Trump and Prime Minister Abe talked for 52 minutes on the phone discussing how to solve the North Korea problem,” said Bareun lawmaker Jeong Woon-chun. “And where is President Moon, who promised to take the wheel [to lead discussions on the North]?”

Brushing aside such criticism, the Blue House said it was more important to have a system to properly respond to the North’s provocation than to call off vacation every time the North launches a missile. “If the president cancelled the vacation, it could send a wrong signal that we are being controlled by the North,” said a senior presidential official.

On why Moon chose to stay at military resort places in Jinhae, South Gyeongsang, the official said Moon chose such places because they are ideal for him to exercise his authority as commander in chief by receiving timely military briefings and hosting video conferences with military generals in case of another North Korean provocation.

On Tuesday, the Blue House denied reports that Moon might cut short his five-day break and return to Seoul earlier than scheduled. It said he would come back on Saturday.