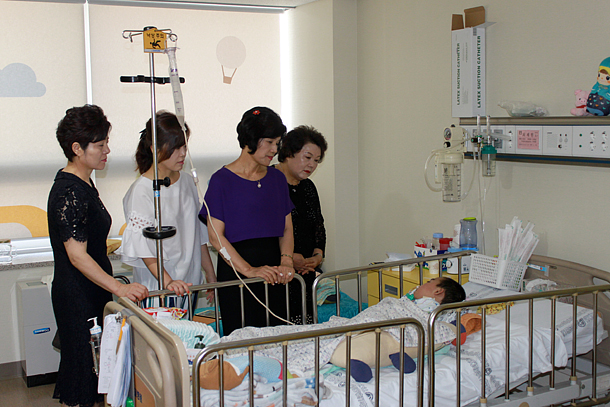 Officials from Gwangju’s office of education and local kindergarten groups visit a 5-year-old boy who was left behind on a school bus for more than seven hours on July 29, 2016. He has yet to regain consciousness. [GWANGJU METROPOLITAN OFFICE OF EDUCATION]

GWANGJU - Choi was 5 years old when he was left behind on a school bus on July 29 last year. The driver neglected to check whether any students were aboard and his teacher forgot to take roll.

For seven and a half hours, Choi was alone, barely able to breathe in the scorching heat. Temperatures hit more than 35 degrees Celsius (95 degrees Fahrenheit) in Gwangju, where he lived, and by the time police found him, his body temperature hovered around 42 degrees. He was unconscious.

Choi now lies on a hospital bed in Chonnam National University Hospital, unmoving except to occasionally cough. In the year since, he has yet to regain consciousness.

Choi is one of a number of similar cases. In January, a 3-year-old was left on her kindergarten bus for more than an hour in Daegu after coming back from a field trip. In February, a 6-year-old boy was left for 40 minutes on a school bus in Gwangyang, South Jeolla. The child was rescued after a passerby called police. In May, a 5-year-old in Gwacheon, Gyeonggi, was abandoned for two and a half hours.

Choi’s mother spends day and night by his side, waiting for her son to wake up. The hospital fees are being covered by the bus operator and the Gwangju School Safety and Insurance Association.

Last November, the Gwangju Metropolitan Office of Education ordered the Gwangju kindergarten Choi attended to shut down by the end of the year, but the kindergarten took the case to court and filed for a stay of execution.

In a separate legal case, the office tried to dismiss the kindergarten’s owner and the two teachers in charge of roll that day, but the school owner sued the Gwangju education office.

In April, the bus driver was given a six-month sentence, while the teacher in charge of roll call received eight months and Choi’s homeroom teacher was sentenced to five months with two years’ probation.