Managers caught between stress and success

Managers caught between stress and success 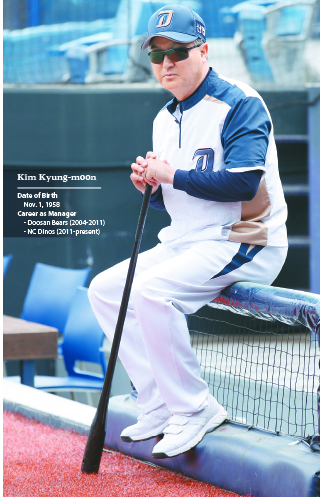 Kim Kyung-moon, manager of the NC Dinos, watches the players at the dugout. Kim was diagnosed with a small benign tumor in his pituitary gland on Tuesday. [JOONGANG PHOTO]

Kim Kyung-moon, manager of the NC Dinos, was absent from the dugout this weekend for health reasons. Kim missed the weekend series against the KT Wiz. During the first game of the weekend he began to experience severe dizziness and acute indigestion. He was immediately hospitalized. Kim was diagnosed with a benign brain tumor in his pituitary gland.

In his absence, Kim Pyoung-ho, the Dinos’ bench coach, has taken on the managerial duties. It is the first time in the Dinos’ history that they have had to substitute their manager. Kim is considered the most experienced managers in the Korean Baseball Organization (KBO). He is the longest standing professional manager of all time.

In 2004, he joined Doosan as manager for seven and a half years until his resignation in June 2011. In 2008, he served as the national team’s head coach for the Beijing Olympics, leading the team to gold. His resignation period did not last long. Just two months later, in August of 2011, Kim was named manager of the Dinos.

Despite 14 stressful years in the KBO, Kim has never before experienced any health issues.

The role of professional manager is a the dream job of many in the world of baseball. It is a position that only ten people have the privilege of holding in Korea. But with great power comes great responsibility. The job is notoriously demanding due to expectations and public pressure. With the ever-growing popularity of baseball in Korea, the pressure is only increasing.

The stress of the job gets worse throughout the year. Six games are scheduled nearly every week during the season. Every day, the words and decisions of the manager are publicly scrutinized, and while one manager celebrates, it is inevitable that another suffers. The praise they receive from a victory is usually outweighed by the criticism they get for a loss.

That said, a successful record does not always mean a content manager. There are always other clubs bidding for the title and those leading the league have targets on their backs. Upon completion of one season, managers immediately start preparing for the next. If the team does particularly badly, resignation is often inevitable.

Fan pressure can also be immense. After leading a formerly successful team through a bad season, one former manager experienced abuse on both his mobile and home phones. One threatening fan even went as far to text him the name, school, grade and class of one his children.

His wife begged him to resign saying, “You have your life as a manger, but this is not living.” Fortunately, the team was once again on the rise, and the fans’ threats became cheers. There were even fans that approached the manager directly to apologize for their previous behavior. “You can’t smile when the team is succeeding as one slip-up can lead to a target on your back again. As manager, you need to prepare yourself for that kind of pressure,” he revealed.

One of the greatest pressures managers experience is battling the front office. If the front office supports the manager, the amount of stress is significantly reduced. However, working with a front office that refuses to accommodate the demands from the field and only emphasizes wins and records, usually spells out a struggle for the duration of the contract. This is particularly challenging as Korean baseball is shifting to revolve around the front office.

In the past, there have been several managers who have fallen victim to the stress of the job. At the height of their championship campaign, Lotte’s manager Kim Myung-sung died on July 24, 2001. He was notorious for chain smoking to cope with the stress and he eventually died from cardiac arrest.

In June of 1997, Samsung Lions manager Baek In-chun left the dugout with hypertension and cerebral hemorrhaging. Returning after a month, he led the team in their first game in a doubleheader against LG, but on September 3rd he resigned.

In 1999, Lee Hui-su led the Hanwha Eagles to their first Series Championship in the history of the franchise. That same year, he developed a tumor which required major surgery, forcing him to resign.

In 2004, his first year leading the Eagles, Kim In-sik was diagnosed with cerebral infarction. The cause was stress-related nervous system diseases.

For managers, the job can be a lonely role. A poor record can turn them from hero to traitor in a matter of weeks. Yet this is the responsibility they take on when they accept the position. As the stress builds, there is little managers can do to relieve the mounting pressure. In the world of professional baseball, managers are caught between stress and success, often jeopardizing their health.