Park returns to the British Open

Park returns to the British Open 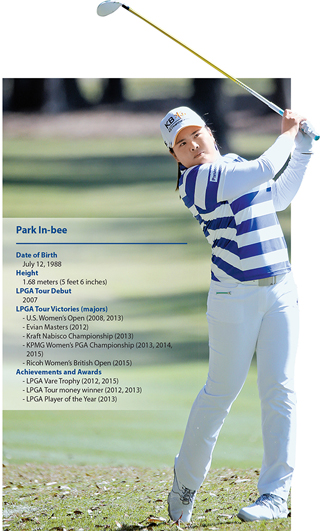 For Park In-bee, the Ricoh Women’s British Open has always been a special tournament on the LPGA tour. In 2015, her victory at the British Open allowed her to achieve her career grand slam, winning all four LPGA major tournaments.

“I still remember 2015 like [it was] yesterday,” Park was quoted as saying on the LPGA website. “I know how special it was to have all the family here and being able to complete in the Grand Slam. It’s a special place and a special time for me. I still live in that memory.”

Having missed the event in 2016 while preparing for the Olympics, where she won gold, Park returns to the British Open for the first time in two years as one of the most favored golfers to win this year.

“I definitely missed coming to the British Open,” Park was quoted as saying. “It’s one of my favorite tournaments to come and play. Even though it is always the toughest week that we play all year, I think because we are having such a tough time, it sticks in our mind for such a long time.”

Just like the Scottish Open last weekend, the challenge this weekend is likely to be the high winds. As the course is designed in links style and located beside the shore, it can play like a completely different course depending on wind direction.

“It’s a very wind-dependent golf course,” Park was quoted as saying. “Getting to the green sometimes becomes a challenge when the wind blows hard. So you’ve got to know how to play knock-down shots and how to play low and how to hold it up in the wind and all sorts of shots.”

Though the weather will be one of the biggest challenges this weekend, Park is confident Korean golfers won’t be affected by the weather much, as they get to play golf in all four seasons. Park is also confident that her off-season training on Jeju Island, where plays during the winter, will help her significantly this weekend.

Despite Park’s thumb injury, which prevented her from playing in tournaments since the Rio Olympics, and from having proper offseason training, she made a comeback in the beginning of this season, winning the HSBC Women’s Champion, her second tournament of the season..

Though she struggled in the past two weeks, missing a cut at the U.S. Women’s Open and finishing tied for 44th at the Scottish Open, Park managed to finish inside the top 25 in 12 of the 14 tournaments she played in this season.

Park will play the first two rounds with Haru Nomura of Japan and Nelly Korda of the United States.

Meanwhile, Park Sung-hyun, the 2017 U.S. Women’s Open champion, will be on the hunt for a second major title this season. Though Park Sung-hyun does not have much experience playing on links-style courses, she decided to take a break from the Scottish Open last week. Last year, Park Sun-hyun’s first British Open, she finished tied for 50th.

And Chun In-gee will play for her chance to capture her first victory of the season at the British Open. Chun will be teeing off with Ai Miyazato of Japan, who will be retiring upon completion of the season, and Paula Creamer of the United States. This is Chun’s third British Open appearance. She has shown improvement at the event every season, finishing tied for 31st in 2015 and tied for eighth in 2016.

Aside from these three, a total of 20 Koreans will be competing this weekend, hoping to continue their dominance on the LPGA tour. All four rounds of the Ricoh Women’s British Open will be aired live on JTBC Golf channel starting tonight.