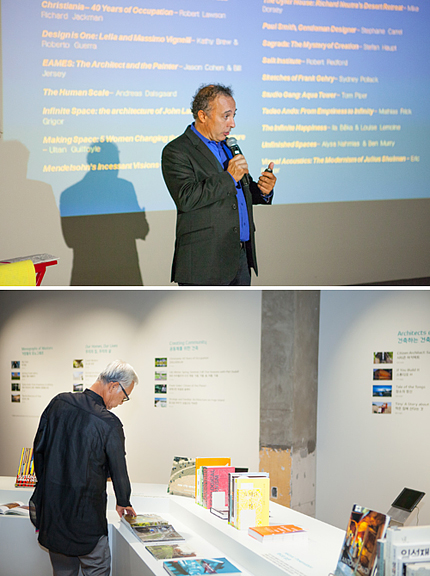 The Architecture & Design Film Festival is taking place in Korea for the second time. The festival began on July 28, and will be held at Storage by Hyundai Card in Itaewon, central Seoul until Oct. 29. Top: Kyle Bergman, director of the Architecture & Design Film Festival, speaks to visitors at the opening ceremony of the festival. Bottom: A visitor looks at a selection of architecture and design books laid out at the gallery. [HYUNDAI CARD]

The Architecture & Design Film Festival (ADFF) has returned for its second visit to Seoul and this time it’s bigger than before. Having started on July 28 at Storage by Hyundai Card, an art exhibition gallery in central Seoul, the ADFF will run through Oct. 29 and screen 24 movies about architecture and design under six different themes.

As the world’s largest architecture and design film festival, the ADFF endeavors to bring together talent from not only architecture, design and film, but also those interested in the fields.

“The power of architecture is that you can do so much good with it; you can enhance people’s lives so much with good architecture,” said Kyle Bergman, the Festival Director, in an interview with the Korea JoongAng Daily. “When you’re putting together a festival, it’s like throwing a dinner party. You want to have something sweet, something savory, something sour, something salty. So when people come to the festival, they can find something that they’re interested in.”

The festival’s collaboration with Hyundai Card has allowed for ADFF to hold its screening over the long period of three months, considerably longer compared to previous locations in which the event took place over only a few days.

“It’s the first time we’ve done it like this in a gallery setting,” said Bergman. “Doing it at a gallery is different than a festival, because at the festival, we show only the new films that come out each year. But this was an opportunity to go back and look at the films that we have shown over nine years, and organize them in different [ways.] People can come back over and over again and they [have the opportunity to] see these films over a long period of time. During a festival, you only have one or two opportunities to see each film.”

Since architecture is often seen as a subgenre of design, Bergman chose to screen films that bring the two fields together. “I also teach designing and building to architecture students. Bringing those worlds of designing and building together is really exciting. That’s why we have one section titled ‘Architects as Makers.’ There’s four films about designing buildings. I would say one of my favorite films is ‘Citizen Architect: Samuel Mockbee and the Spirit of the Rural Studio.’ Sam was a great architect from the rural south, who took architecture students and brought them out to build in poor communities in southern America. It’s a fantastic film.”

Having worked as an architect himself for over 20 years, Bergman believes that architecture is more than merely putting up bricks for a building, but a means of changing the society we live in.

“The world is an amazing place, and what we do in the creative process, both making films and making architecture, can make the world an even better place. I think my goal for the festival is to help us all be more design-conscious. And if we can do that, we can make a beautiful world,” said Bergman.

Architecture is something people can’t miss, since it’s found everywhere and anywhere people go. Yet, not many people get the chance to see what’s happening behind the scenes: how the architects came up with the ideas behind a particular building, how it was made and how it affects the surrounding environment.

The ADFF aims to give people the chance to experience both the physical and psychological labor behind architecture through high quality films carefully chosen by the festival organizers.

The screening rooms have a set number of chairs available, but visitors are welcome to sit on the floors with their own blankets. A single-day pass allows attendees to view movies on the day of purchase as well as return once more by the time the festival ends in October.

Storage by Hyundai Card is in Itaewon, central Seoul. Get off at Hangangjin station, line No. 6, exit 3, and walk 10 minutes. Admission is 5,000 won ($4.45) for adults and a 20 percent discount is offered if the tickets are paid for with a Hyundai Card. The gallery is closed every Monday. For more information, visit storage.hyundaicard.com or call (02) 2014-7850.