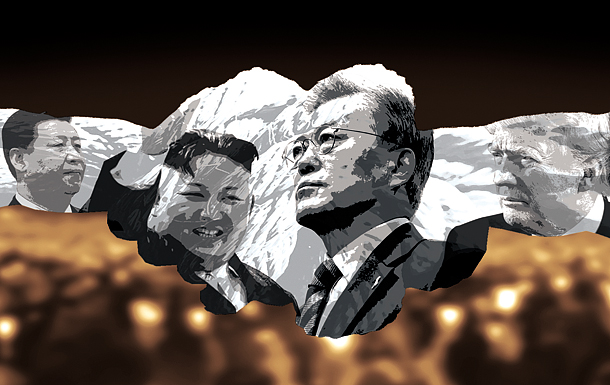 After President Roh Moo-hyun passed away, his supporters felt utterly indebted to him. Nine years have passed since, and they are now celebrating an election victory. At the head of the table are many progressive-minded figures who have long been forgotten since the Roh era.

The winners held their party on a “cloud.” What brought them up there was their high approval rating from the public. When a winner rises to the clouds, serious events on the ground may seem small, and the calculation of risks and costs may not be accurate. It becomes easier to make difficult decisions. With opposition parties pathetic and disorganized, the ruling party is becoming more confident and bold.

Over the past three months, the Moon Jae-in administration and his party have been pushing for revolutionary national plans. They have selected many ideas from minority groups, though their method for pushing these policies can be controversial. Moon’s modus operandi is reminiscent of Alexander the Great and his speedy expedition as he believed he was destined to conquer Asia. Alexander the Great became the king of Macedonia at age 20 after cutting the Gordian knot rather than trying to unravel it. An oracle prophesied that the one who untied the knot would become king of Asia, and Alexander the Great had conviction that he was the one. He pushed for world domination and died at age 33. Friends, such as Ptolemy, advised him to slow down, but Alexander the Great was not convinced.

Leaders with a sense of calling and brazen conviction make historically important decisions immediately after short discussions. As the Moon administration pushes its policy experiments in its first three months, I fear the conviction of the candlelight oracle. President Moon seems determined to push forth his election promises while the spirit of the candlelight protests that brought down his predecessor is still powerful.

During the protests, Koreans expressed fury over Park Geun-hye’s incompetency and corruption. After she was impeached, a snap election was held and Moon was voted into office. However, he did not receive a candlelight oracle to become president, nor was he entrusted by history to break and erase all of the country’s accumulated past. It is not desirable to push for major policies like phasing out nuclear power, making 10,000 won ($8.90) the hourly minimum wage, putting contract workers on a salaried payroll and raising taxes on the super-rich without sufficient public debate or cooperation from the National Assembly.

Creative destruction progresses gradually over time through the creation of new things and removal of the old. Similarly, the knots that President Moon needs to untie reflect accumulated changes in the system, and they should not be cut off without having alternatives in place.

All changes accompany costs. Progressive socialism has a weak sense of costs. Shifting it all to the rich will send it back to the market and to the citizens, market players and the next generation. Most of our past presidents failed because they refused to be limited by the country’s single-term system. They were tempted to realize their ambitions by denying the past. In this merry-go-round of presidents, Korea has not had time to accumulate a legacy, and the country fell into a slump.

President Moon must learn from the failures of his predecessors and open a new period of accumulated policies for the future. His priorities should be revising the constitution, ensuring national security and guiding economic recovery. I hope Moon will prudently approach the country’s major issues and untie the knots.

*The author, a former commerce, industry and energy minister, is chairman of the North East Asian Research Institute.