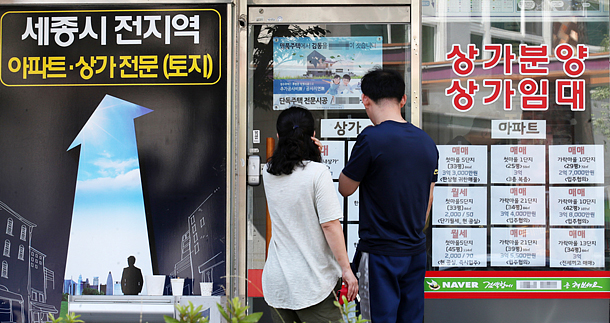 A couple checks out real estate listings at a realtor’s office in the administrative city of Sejong on Wednesday. On the same day, the government designated 11 districts in Seoul and Sejong as speculative investment regions where its toughest regulations will be applied. [YONHAP]

The Ministry of Land, Infrastructure and Transport and other parts of the government announced Wednesday curbs on mortgage lending and regulations on the real-estate market to crack down on speculation.

Some of the plans include raising the transfer tax on transactions by investors who already own two or more residences. 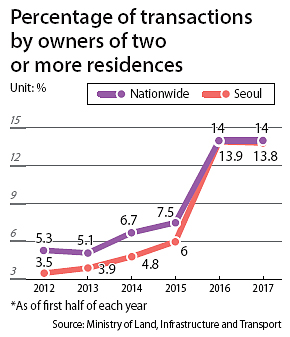 “The real-estate market seems a little unstable due to the expanded speculative sentiment in the country,” said Kim Dong-yeon, finance minister and deputy prime minister for economic affairs, on Wednesday. “This is hurting people who are trying to buy homes they actually plan on living in and causing a hike in household debt. The government will pre-emptively respond to regions where the markets are overheated and do its best to stop speculation. We will use every possible regulatory measure to deal with the current issues in the housing market in the country.”

In Korea, speculation on real estate is not as accepted as in other Asian countries like China. Politicians found speculating on real estate suffer and liberal governments routinely try to make it more difficult for profits to be made from it.

According to the Transport Ministry, all regions in Seoul, Gwacheon in Gyeonggi and the administrative city of Sejong are seeing too much speculative activity and are labeled overheated. In those place, the government will make tougher loan-to-value (LTV) and debt-to-income (DTI) requirements for people applying for mortgages.

The government designated 11 districts in Seoul and Sejong as speculative investment regions where the toughest regulations will be applied. These regions were selected as residence prices rose 130 percent more than consumer prices in general in the previous month.

Overheated zones will face a tightening in regulations but not as much as speculative investment zones. Starting next month, the government will ban people from reselling purchase rights to apartments being built or redeveloped in overheated zones.

“According to statistics for the past 10 years or so, the supply of housing units has risen significantly but the proportion of people who own their own home remains below 60 percent,” said Kim Hyun-mee, minister of transport, on Wednesday. “People who already own a number of housing units are purchasing more. Low-income households can neither buy their own home nor [earn enough to] catch up with the rise in jeonse [lump-sum deposit contracts] and monthly rents.”

According to the Transport Ministry, the number of homebuyers who already own two residences accounted for 14 percent of the total transactions in the first half of this year.

The government will make speculative buying tougher. In the past, a property owner could get around some regulations by doing a transaction in the name of another member of the household. In the future, the government will limit mortgages per household rather than per individual.

The maximum LTV and DTI in speculative regions will be lowered. The ratios are currently between 40 percent and 70 percent based on the types of property and loan maturity dates. The government will lower the ratios to 40 percent. For households with at least one mortgage to pay back, 30 percent DTI and LTV rates will be applied. The new rules will go into effect starting today.

Choi Jong-ku, head of the Financial Services Commission, called a meeting with CEOs of the country’s major banks to ask for cooperation with the new property policies. Choi expressed concern about the heavy demand for loans ahead of the implementation of the regulation.

“The financial industry should manage risks on its own and prevent excessive loan requests before the measures go into effect,” Choi told the CEOs during the meeting on Wednesday.

Choi warned consumer finance companies, which borrowers go to after banks turn them down, should not exploit the tougher regulations. He said the Financial Supervisory Service will keep watch on financial institutions’ behavior in cooperation with the Financial Services Commission.

Analysts had mixed views on the new policies. Some believed they will stabilize the market.

“It appears that the government came up with every possible regulatory measure except for raising the property tax,” said Ham Young-jin, a senior researcher at the real estate information provider Budongsan 114. “I believe the new policies will be effective in reducing speculation in districts in southern Seoul at least temporarily.”

Kim Hyo-jin, an analyst at SK Securities, said the policies will help stabilize the market in the short term. But he doesn’t agree that housing prices are too high. “I don’t think there is a big bubble in the Korean housing market and expect the prices will continue to rise, especially in the Seoul region, following many reconstruction projects,” he said. “The plans to stabilize the housing market came about 40 days after the government detailed some of its intentions and this clearly shows that the government has a strong interest in solving the issues.”

Joo Won, a senior research fellow at the Hyundai Economic Research Institute, argued that the government’s moves late last year had a limited impact on stabilizing the market. “When coming up with real-estate related policies, the government needs to take careful measures to prevent the market from freezing,” said Joo. “The government should maintain its policies to flexibly supply housing units based on demand but should focus on diversifying demand to various regions through developing and improving living conditions there.”

All three major opposition parties criticized the government’s plans, saying they will be ineffective in solving high housing prices.

“The government’s real-estate policies seem to include too many policies that are anti-free market,” said Song Suk-joon, a lawmaker from the main opposition Liberty Korea Party on Wednesday.

Lee Hye-hoon, a leader of the conservative Bareun Party, said that the government can’t just suppress the market. “There is a significant shortage of available housing units in Seoul and in order to solve it, the government should ease the regulations in a decisive manner,” she said.

The People’s Party also criticized the policies, saying they will fail as the Roh Moo-hyun administration’s did.

The Roh administration toughened regulations on the real estate market to reduce speculation, but it eventually led to a hike in housing prices due to a fall in supply.