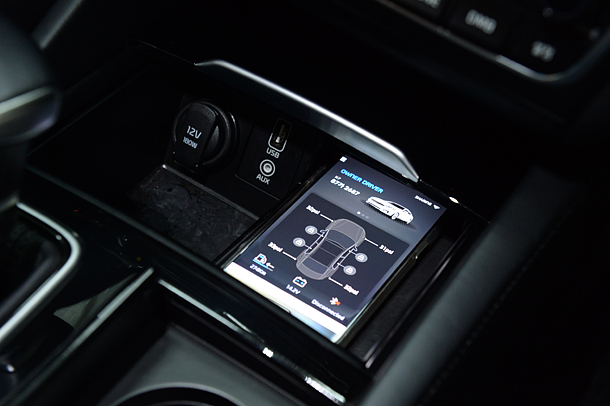 The new app developed by Hyundai Mobis utilizes NFC technology to enable drivers to use a smartphone to control their vehicle. [HYUNDAI MOBIS]

Hyundai Mobis, Korea’s top auto parts supplier, has developed a digital vehicle key that could make conventional car keys a thing of the past.

This is the latest breakthrough in the company’s research and development effort to adapt information and communication technologies to the automobile market.

The latest system utilizes smartphones’ near field communication (NFC) system, according to the company. A smartphone app developed by the company uses the NFC sensor embedded in a smartphone to connect the device and the vehicle.

The driving authorization system allows the driver to operate the car without the traditional keys, including unlocking the vehicle and starting the engine by having the phone near the door handle or on top of the charging pad inside the vehicle.

“Hyundai Mobis is the first parts supplier in Korea to complete smart key development using the NFC system,” said a spokesperson from the company.

“Our goal is to have the system available for public use by 2019.”

The NFC system has been widely used as a means of electronic payment. NFC chips, for instance, are embedded in the public transit cards used in Korea, which makes it easier to use public transportation such as subways or busses.

But a growing number of major automotive companies around the world have integrated the system into cars.

Mercedes’ NFC vehicle key allows the driver to start the car even when a phone’s battery is dead. In the United States, Tesla also utilizes a similar system to allow its customers to operate vehicles without conventional keys.

The security system only allows smartphones with authorized codes to operate the vehicle, according to the spokesperson.

The company is also reportedly developing a smart parking assist system that allows drivers to park cars via their smartphone.

“Competition amongst competitors to amalgamate vehicles with ICT is getting fierce,” said Cho Seo-gu, a director at Hyundai Mobis.

Cho added that the auto parts supplier aims to become the leading company in developing new technologies to maximize driver convenience and safety.