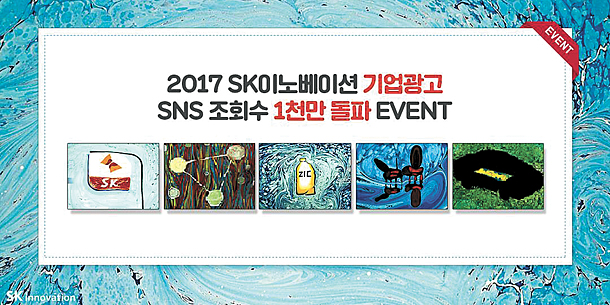 SK Innovation is running an event on its official blog and Facebook page, celebrating 10 million views of its ad on social media. [SK INNOVATION]

On Aug. 1, Kim Jun, the CEO of SK Innovation announced that the second advertisement in its “Big Picture of Innovation” series had more than 10 million views across online platforms. This is the second time that the company has broken the threshold of 10 million hits - the first being an advertisement showcasing the world of artist Kim Jung-ki that debuted last year.

The commercial was released on April 5 via a variety of platforms including SK’s official blog, Facebook page, online channels, TV channels, printed media and billboards in baseball stadiums.

The company’s ingenious advertisement, which was created in collaboration with Turkish artist Garip Ay using the ebru art method, left a refreshing impression on consumers. Consequently, the ad reached a million views in 10 days after the release. Ebru, a traditional Turkish art, involves marbling oil paint on a water canvas and placing a piece of paper over it.

The commercial owes its success to a skillful collaboration between advertisement and art. Jeong Yeong-sang, a Creative Director at Daehong Communications, was responsible for the production of this advertisement campaign. He remarked that the “introduction of the ebru method enabled us to evoke SK Innovation’s characteristic as an energy and chemicals company in a creative way.”

He also added that the “Fact X Impact” structure is gaining attention on social media, even becoming a buzzword.

Lim Su-kil, executive vice president of SK Innovation’s public relations office, said “We are thinking hard about ways to make SK Innovation well-known to the public, without being deterred by the material.

“In the second half of the year, we are also planning to come up with new channels to promote SK Innovation’s business to consumers through the collaboration of music and art.”

Meanwhile, SK Innovation is running an event titled “Fact X Impact” on its official blog and Facebook page, celebrating its 10 million views of the ads on social media.

Through the event, 1,000 people who submit their own stories about the topics of travel, holiday or vacations will be chosen to receive a free iced Americano.