‘Companies and the rich must be free to actively participate’

‘Companies and the rich must be free to actively participate’ 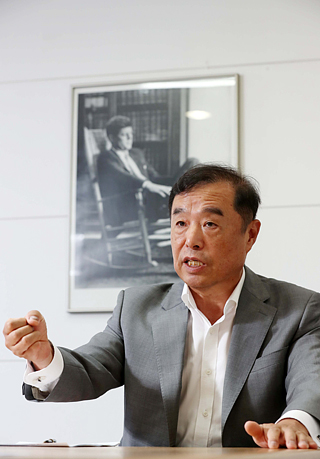 Some of the most heated debates these days center on taxing the top wealthiest and leading Korean conglomerates.

The Moon Jae-in government has vowed to achieve an economic growth that is fueled by increased income and has set out 100 national projects that will require spending of 178 trillion won ($158.4 billion) over the next five years.

The Moon administration’s goal is to change the economic paradigm by expanding job opportunities by increasing government spending, which will contribute to improving household income.

In solving this problem, the government is working on increasing the tax rates for the nation’s wealthiest, including leading conglomerates, which wasn’t included in the initial 100 national project plan, where the Moon government said there would not be any additional taxation. This was immediately met by some who have argued that the taxation shouldn’t be limited to the top wealthiest.

One such advocate is Kim Byong-joon, who is currently a professor at Kookmin University but who served as the top policy adviser to the late President Roh Moo-hyun. The 63 year-old former Blue House aide said there’s a problem in narrowing the taxation only to the wealthiest.

“The problem with such an opportunistic and populist approach,” he said, “is that it will not only increase the national debt but will also worsen the [nation’s] fiscal soundness.”

Q. Why is that? Do you mean that there’s a problem in securing 178 trillion won?

A. The plan of securing the budget is too unrealistic. Eventually, what it means is that the government is going to collect more taxes because they need more. And they need to collect much more than the 178 trillion won. And the answer is obvious. The government needs to expand taxation to include those in the upper and middle classes.

It’s surprising that the top policy adviser of the Roh Moo-hyun administration is making such comments. Wasn’t the comprehensive real estate tax also an exclusive tax against the wealthiest?

The basic direction was to increasing taxes on ownership while lowering the taxes on transactions. The average property tax rate on real estate among OECD member countries is between 0.8 and 1 percent. But in our case, it was 0.25 percent. Because our country’s apartment values have intense volatility, property tax has been remained low.

But the capital gain tax, the transaction tax and registration tax rate were high. As a result, speculative investors who purchased large apartments grew. We implemented the comprehensive real estate tax to restrain those speculative demands and tried to expand it to apartments whose values were over 300 million won. Additionally, to prevent the disparity between regions, we have made it to a national tax instead of the regional government tax. There was a precise policy philosophy of distributing the taxes to be used in the balanced development of regional governments.

So why wasn’t the plan [of expanding it to 300-million-won apartments] carried on?

There was strong resistance. I once asked a taxi driver what he thought about the comprehensive real estate tax, and the driver asked why the government was trying to collect every penny that the people were making. I was very surprised. The comprehensive real estate tax, which was first implemented in 2005, had almost no much relation to people like the taxi driver who were in lower-income households, and yet when we conducted a survey, everyone opposed it. The ruling party even opposed it, saying they would lose voters. We couldn’t take another step forward.

President Moon said the middle and lower classes shouldn’t worry. Some are calling [the higher tax rate on the wealthiest] a “noblesse oblige honor tax” [whereby the rich gain honor by helping society via additional taxes].

That just doesn’t make sense, as taxation is not voluntary but forced. Honor is something one does on his or her own. It’s just a play of words, a populist move that uses sentiments that are unfavorable to the wealthy.

Even so, J-nomics stresses redistribution through taxation.

In order to do so, companies and the rich must be free to actively participate [in the economy]. [The government] needs to layout the infrastructure so that companies can invest, while improving regulations and innovating in the education system. When people are confident they can make money here in Korea and raise their children, people will be able to accept a higher tax rate.

But what would happen if there’s no proper school to even attract foreign companies while companies face various regulatory obstacles and even have the burden of additional taxes? The key is whether our society has a good environment for doing businesses. But with the government raising taxes on top conglomerates and the wealthiest, there will be those who start packing up to leave the county.

This government stresses narrowing the income gap between the haves and have-nots. What is your view?

I would have to mention Sweden, which is famous for its welfare programs. Sweden has a robust free market. For example, for-profit hospitals, almost taboo in Korea, are allowed in Sweden. The genie coefficient index in Sweden is 0.4, but when it comes to disposable income, the coefficient index drops to 0.2 and 0.3, largely thanks to welfare benefits funded by taxes.

Companies make huge revenues due to this high level of business freedom, while the government distributes wealth equally. But in the case of Korea, there are so many regulations that lead to illegality such as embezzlement. It takes 10 to 20 years for the government approve businesses. On top of it all, the government plans to increase taxes. That’s why people complain.

But survey shows that nearly 90 percent of people are in favor of taxing top businesses and the wealthiest.

How could the public decides important national policies? President Roh said while he respects public opinion, it lacked vision and strategy. We have to take notice of his saying. President Roh often said large birds flew even when faced with strong headwinds. The government should have a vision and try to convince 90 percent of the public on that vision. Public opinions are often said without much thought.

It seems the fundamental philosophy between President Roh and President moon is different.

President Roh had a strong will to do what needed to be done even if his own party or the people opposed to it. But the current government doesn’t seem to have such will.