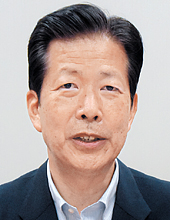 Tokyo Governor Yuriko Koike’s Tomin First no Kai (Tokyoites First), a new regional party, won 55 out of 127 seats, becoming the leading party in the assembly. Its ally in the elections, the Komeito Party, saw all 23 of its candidates win.

Japanese Prime Minister Shinzo Abe’s LDP suffered a historic defeat, winning only 23 seats. This was down from 57 seats in the previous assembly. Abe has faced plummeting approval ratings amid a series of scandals and allegations of political favoritism.

Natsuo Yamaguchi, 65, chief of Komeito Party, sat for an interview with the JoongAng Ilbo on July 27 in his office in Tokyo. He discussed his party’s success in the assembly elections as well as the prime minister’s push to amend Article 9 of Japan’s pacifist constitution.

While Yamaguchi is not opposed to a constitutional amendment, he said that it should come only when valid and “appropriate.”

Article 9 states that “the Japanese people forever renounce war as a sovereign right of the nation and the threat or use of force as means of settling international disputes.” It also stipulates, “In order to accomplish the aim of the preceding paragraph, land, sea, and air forces, as well as other war potential, will never be maintained. The right of belligerency of the state will not be recognized.”

Abe has pushed to revise the constitution by 2020. But amending the constitution, which came into effect in 1947, would require approval of two-thirds of both houses of the Japanese Diet and a majority of voters in a public referendum.

Yamaguchi said a constitutional amendment should reflect “widespread agreement, and an overwhelming majority of the people” calling for change. Yamaguchi, who earned a graduate degree in law from the University of Tokyo, is a member of the Diet’s House of Councillors, or upper house.

The following is an edited except of the interview.

Q. How did you oversee the Tokyo assembly elections?

A. In the governor election last year, the candidate supported by Komeito and LDP lost to Koike. Koike became governor through overwhelming support. Her slogan was Tokyo reform. The biggest immediate task for the city government is successfully holding the 2020 Tokyo Olympics. The Tokyo metropolitan and national governments have to clearly cooperate. Within the city government, the governor and assembly have to cooperate. What is required for this is coherent responsibility. Komeito, in order to realize this, checked if policy cooperation with the governor was possible. For example, the governor [as a part of Tokyo reform] cut her own salary by half .?.?. and Komeito proposed to decrease lawmakers’ salaries. A situation where all factions could agree was reached. Komeito also called for support of private high school students who come from households with lower incomes, which was backed by the governor. We pushed for a barrier-free city without discrimination against second-class citizens, and a budget was allocated. I believe Gov. Koike gained confidence that with cooperation with Komeito, Tokyo reform could be possible. And the governor’s side requested cooperation with Komeito.

This would mean that Gov. Koike extended a hand first?

The governor did not have a foothold in the city assembly. A foothold was needed considering the future of the Tokyo government, but Tomin First no Kai didn’t have any past records or experience. So I think that the presence of Komeito, which has had results, experience and cohesion was very important.

It is not an easy feat for all candidates from a party to win in an election, whether it be at the regional or national level.

Komeito holds the spirit of “together with the public.” Holding the position that we need to be on equal footing with all voters, we have to clearly accept their needs. To this end, we need people with open characters, the capability to explain policies well and a posture to hold dialogue to go forward together. And we have put effort in fielding such candidates.

Why did Komeito dissolve the coalition with the LDP at the Tokyo government level?

Looking back at the city government’s long history, it is not that we have always cooperated with the LDP. We have taken into consideration and responded to the position of the Tokyo governor and the LDP and Komeito’s policy differences. In terms of Gov. Koike’s announcement of Tokyo reform and the success of the Tokyo Olympics, there were areas in which Komeito was the one holding a posture of responsibility. The LDP maintained the notion of cooperation between Prime Minister Abe and regional governors, but in the Tokyo assembly, the LDP was instead defying the government. One can say, the national LDP and the city-level LDP were not on the same page.

Abe revealed his intention to submit the LDP’s amendment to Article 9 of the constitution, which deals with Japan’s Self Defense Forces, to the Diet this fall and to enact it by 2020. Can you comment?

The Komeito Party fundamentally interprets this as Prime Minister Abe, as head of the LDP, proposing and ordering [constitutional amendment] discussions within the party. Because the constitution stipulates that the prime minister has the obligation to respect and uphold the constitution, the prime minister cannot say himself that the constitution has to be changed. I believe he made the remarks as the leader of a party. Komeito holds a posture of observing the discussions within the LDP. A [constitutional amendment] is not something that the Diet can achieve as it pleases by simply garnering two-thirds of votes in the upper and lower houses. Majority support has to be won in a national referendum. I don’t think it is reasonable to attempt this just because there is a possibility of winning 51 percent. In the Diet, the main opposition party and others have to be included in widespread agreement, and an overwhelming majority of the people have to call for a change. Considerable effort would be needed here.

What is your view of amending Article 9?

I don’t reject a constitutional amendment. Before an amendment happens, I believe that the three large principles of pacifism, guarantee of fundamental human rights and popular sovereignty have to be protected. However, 70 years has passed since the constitution was enacted. If there is appropriate value in a new constitution, I believe an approach of adding onto existing provisions is valid. The Komeito Party has not made a clear position on Article 9. There are many opinions within the party. What is agreed on within the party is that Article 9’s first clause (renouncing war) and second clause (never maintaining land, sea, and air forces, as well as other war potential) do not have to be changed.