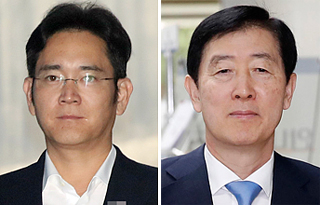 Samsung scion Lee Jae-yong said Wednesday he was not involved in decisions made by the conglomerate’s strategy office, including a controversial project to support a longtime friend of former President Park Geun-hye, denying charges that he had bribed the impeached leader for her political favors.

For the first time since his trial began in April, Lee took the stand and directly answered questions by the independent counsel team concerning accusations that he and four other Samsung leaders offered or promised massive bribes to Park and her friend, Choi Soon-sil. The bribes totaled more than 43 billion won ($38.4 million), including a generous sponsorship for the equestrian training for Choi’s daughter, Chung Yoo-ra.

Before Lee took the stand, Choi Gee-sung, former vice chairman of the Samsung Group who once headed the powerful Future Strategy Office of the conglomerate, answered questions. He said he intentionally kept Lee uninformed about the conglomerate’s controversial decision to support Choi Soon-sil and Chung in order to protect the Samsung heir from possible repercussions.

Choi Gee-sung was the second highest executive of the Samsung Group and a mentor to Lee after Lee’s father, Lee Kun-hee, collapsed in 2014 for health problems. After Samsung was marred in the presidential scandal, the Future Strategy Office, the highest decision-making body of the group, was dismantled. The office was behind a series of plans to support Choi Soon-sil.

Lee also said he was not involved in the controversial merger between Samsung C&T and Cheil Industries in 2015, which cemented his grip on Samsung Group. The independent counsel has argued that Samsung bribed Park through her friend in return for the president’s help to influence the state-run National Pension Service to use its voting right to support the merger.

“I had a large stake in Cheil Industries, but I did not know well about their operations,” Lee said. “The presidents of the two companies and the Future Strategy Office did everything. It was not something I should be involved in recklessly, and I thought experts will handle the issue for me.”

Choi Gee-sung also rejected the independent counsel’s argument that Samsung’s support constituted bribery in return for the president’s support of Lee’s takeover of the group. “I still cannot understand why the succession issue is linked to the president,” he said. “Lee is the only son of Chairman Lee [Kun-hee] and he was already recognized as the successor inside and outside the group because his stakes were already cemented.”

Throughout the hearing, he also insisted that he was the highest decision-maker in the Samsung Group, while he was working as vice chairman, and that Lee was not involved.

The independent counsel presented a record of a Samsung meeting in August 2015, which showed that Choi Gee-sung approved a plan to support six equestrian athletes, including Chung. He admitted to having done so, but said he did not report the decision to Lee.

“The president demanded supports for the equestrian community, but she didn’t specifically ask to support Chung,” Choi said. “Choi Soon-sil appeared to have run a scheme from behind, but we could not confirm it. I thought it was not appropriate to inform Lee about a possible rumor.”

“I also thought there was nothing to gain by reporting this to Lee,” he said. “I was going to take responsibility and step down, if this becomes a problem, because I have already worked for the company for 40 years. There was no need to involve the heir in the controversy.”

He still admitted he was aware of the possible consequence when Samsung decided to support Chung’s expensive training. “If the athletes were selected transparently, there would have been no problem,” he said. “But we were asked to include Chung, so I thought this could be an issue.”

Choi said Lee only became aware of Choi Soon-sil and Samsung’s support around August and September 2016, when the media started reporting on the scandal. “I am not sure Lee thought it was illegal or not,” Choi said, “but when I reported to him about the issue, he looked puzzled. He didn’t say anything special.”

Meanwhile, former President Park refused to participate as a witness in Wednesday’s trial. Although an assistant independent counsel visited the Seoul Detention Center in the morning with a warrant, Park refused, citing her poor health conditions.

The independent counsel team said three one-on-one meetings between Park and Lee from 2014 to 2016 were the key events proving the bribery charge. They have so far called Park three times as a witness, but she refused all summons. A witness is not legally obligated to accept.

On Wednesday, Lee told the court that he was contacted by the Blue House to attend the meetings.

After the independent counsel detained Lee in February, he has been standing trial in detention. The court will allow Samsung lawyers and independent counsel to debate today and Friday and hear their closing arguments on Monday. After weeks of deliberation, the court will announce a ruling. Lee’s detention warrant expires on Aug. 27, and if the court does not reach a decision before that time, he will stand trial without physical detention.