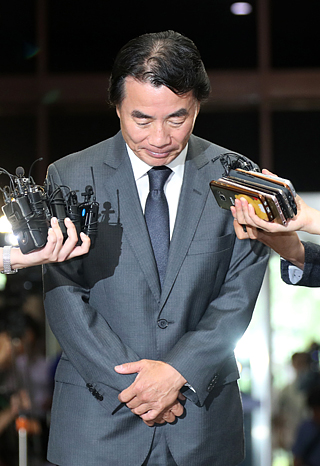 The chairman of Chong Kun Dang Pharmaceutical Corp. was questioned by police on Wednesday for verbally abusing his drivers, 20 days after audio files of his insults inside the car were made public.

“I wish to apologize 100 times and ask for forgiveness from the drivers and people who have been hurt by my actions,” said Rhee Jang-han, 65, appearing at the Seoul Metropolitan Police Agency to attend questioning and bowing his head in contrition before reporters. Asked whether he insulted any subordinates in addition to the four drivers already known, he did not give a direct answer but said, “I tried to do my best at work.”

In addition to the verbal invectives he aimed at the four drivers, Rhee is also suspected of insulting a company official on the personnel team, who left the company and sued Rhee for the abuse.

Public sentiment has soured against his company in recent weeks after audio clips of him verbally insulting his chauffeurs were made public on July 13, forcing him to offer a public apology the following day.

In the audio file, he was heard saying to his driver, “You just look fat … What does your father do? I feel so sorry for them [that you are their son].” He also called the driver “useless” and told him, “Shut your mouth.”

Rhee’s abuse was made public after Rhee’s former driver quit the job after two months and submitted the audio file to the Hankyoreh, which reported it on July 13.

So far, four of Rhee’s drivers are reported to have suffered verbal abuse, reporting weight loss and depression. Some also sought psychological counseling. Over the past year, three drivers quit because of Rhee’s abuse. He also allegedly told them to violate traffic regulations, such as crossing a pedestrian walk when the light was red.

When asked whether he plans to keep his job, he said he would think about it after the questioning, which was ongoing as of press time.

Rhee is being questioned for giving his business partners erectile dysfunction pills as gifts without prescriptions. His company posted 830 billion won ($730 million) in sales last year.