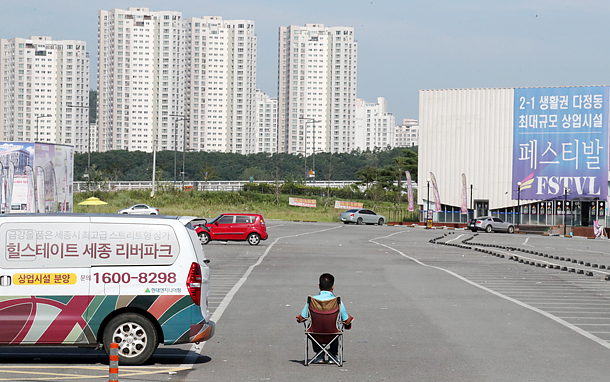 A real estate agent representing a commercial space in an apartment complex in Sejong waits for customers at a parking lot on Thursday. After the government designated Sejong as a zone with rampant real estate speculation and imposed stricter lending standards in the area, property inquires have dropped. [YONHAP]

A day after the government announced measures aimed at cooling the country’s real estate market, the Blue House defended its actions on Thursday, saying the administration would do everything in its power to curb runaway property buying and speculation.

Kim Soo-hyun, the president’s senior secretary for social affairs, told reporters at the Blue House that the administration was “strong-willed” in setting a new normal for the real estate market through consistent policies.

In Korea, speculation on real estate is not as accepted as in other Asian countries like China. Politicians found speculating on real estate suffer, and liberal governments routinely try to make it more difficult for profits to be made from it.

Kim is a top aide to the current president, Moon Jae-in, a liberal. He served in the same role under Moon’s mentor, Roh Moo-hyun, when he was president from 2003 to 2008. Kim was one of the main architects of Roh’s real estate policies.

During the Roh administration, Korea’s real estate prices, particularly in the wealthy Gangnam areas south of the Han River in Seoul, saw a significant surge.

In response, the government imposed a comprehensive real estate tax on the combined value of all property owned, though it did little to tamp down prices.

Kim has since taken responsibility for what he considers failure to stabilize the market under Roh and vowed never to repeat the same mistake again.

“During the Roh Moo-hyun administration, apartment prices rose significantly, and in order to stabilize them, we announced 17 small and big real estate measures,” Kim said. “It was a clear failure in the sense that despite having to announce policies several times, real estate values rose sharply.”

Kim said the reason Roh’s administration failed to rein in prices was largely because of its simple approach that focused too much on trying to control supply and demand. He said the government failed to realize the influence of excess liquidity in the market.

By the end of Roh’s term, Kim said, the government learned it could stabilize prices by tightening loan regulations. “As a result, we were able to avoid the worse situation that other countries faced,” Kim said, referring to the mortgage crisis of 2007-08.

The Blue House aide blamed the previous two conservative administrations for the recent surge in home prices. He said previous governments in the last three to four years have encouraged the public to take out loans in order to buy homes, dragging up the price of real estate.

After the government unveiled its package of measures aimed at cooling the real estate market on Wednesday, critics said they focused too much on trying to limit demand and did little to increase supply. One of the measures includes tighter lending standards in overheated areas.

In response, Kim said that there was more than enough supply of homes.

“During the Park Geun-hye administration, when supply was at its peak, new apartments exceeded 700,000 a year,” Kim said. “The number of apartments put in the market in the last three years has been the largest since the country was founded.”

When asked to comment on the claim that supply in Gangnam was not high enough and drove up prices in the neighborhood, Kim said he disagreed.

“[Government] approval of such sales has tripled more than average sales,” Kim said. “I don’t see it simply as a problem of supply and demand.

Kim compared the current market situation to a fire and said his priority was putting out the flames. He said the government will only start building new homes and providing them to households of a certain income after the fire is put out.

“The real estate prices in some neighborhoods, including Gangnam, are very abnormal,” Kim said. “There are a lot of similarities to the abnormal behavior that major cities in advanced economies experienced after the global financial crisis in 2008.”

However, Kim was cautious about expanding the bracket for the comprehensive real estate tax and other property taxes. Unlike the capital gains tax, which is only levied once profit is made from selling real estate, property taxes are levied regularly, and any effort to expand them will likely face strong resistance from the public.