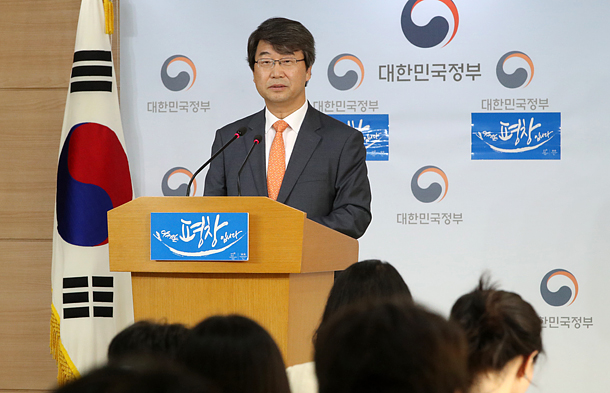 Kim Ji-hyung, chairman of the civilian-led commission collecting public opinions on whether to permanently stop the construction of two nuclear reactors, holds a press briefing in Sejong on Thursday. [YONHAP]

A nine-member commission collecting public opinion on whether to permanently halt construction of the Shin Kori 5 and 6 nuclear reactors again emphasized on Thursday that it doesn’t plan on making the final decision on the reactors’ fate, but will only make a “policy recommendation.”

The issue has been controversial since the Office for Government Policy Coordination, under the prime minister’s office, said it would follow the commission’s decision. Some criticized the government for trying to avoid taking full responsibility for the decision and questioned the legal basis for allowing a second panel of people chosen by the commission to decide the fate of important state-run projects like nuclear power plants.

“The public assessment’s purpose is to find out what the public thinks about a certain policy instead of coming up with decision that will have binding power,” said Kim Ji-hyung, the commission’s chairman. “We will remain as an advisory organization that will administer the process.”

The commission will call the members of the panel “public participants” and will provide them information on Shin Kori 5 and 6 nuclear reactors. The panel will hear from various stakeholders in the issue such as people living near the reactors. The government has allocated 4.6 billion won ($5.6 million) as a budget for the commission.

Many people living near the reactors and workers on the site want construction to continue and criticize the government for stopping it without thorough discussion with them.

The labor union of Korea Hydro & Nuclear Power Corporation, which manages nuclear power plants in the country, and some scholars specializing in nuclear energy filed an injunction to suspend the commission’s public assessment process on Tuesday. They argued there is no legal basis for allowing the commission to hear public opinion on the issue in the first place and that it is the state-run energy council’s job to do so. The union plans on filing more lawsuits, possibly even with the constitutional court.

Residents of Ulsan, where the two nuclear reactors were being constructed, also are continuing their protests against the government’s decision since it might have a negative impact on the regional economy.