Bitcoin stumbles in wake of split

Bitcoin stumbles in wake of split 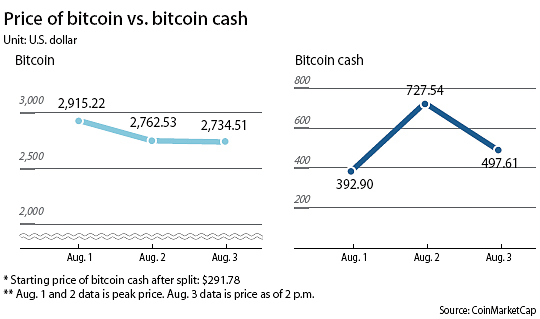 Bitcoin, the world’s top cryptocurrency by market capitalization, underwent a much-contested split earlier this week that sent the price of bitcoin plummeting, while the newly-created derivative, bitcoin cash, has quickly gained ground to become one of the world’s top currencies.

The split, known as the SegWit activation, occurred on Tuesday at midnight, Coordinated Universal Time, and was the conclusion of a bitter months-long civil war in the bitcoin community over the future of the currency. Korean investors of cryptocurrencies have been anxiously watching the feud from the sidelines.

In the month leading up to the split, there was a sharp wave of offloading that shook the global market. By mid-July, the price of bitcoin had nose-dived to as low as $2,000.

The derivative bitcoin cash, meanwhile, has been welcomed with open arms by global miners. The first block was discovered just six hours after the split, which coincides with the time that its mother coin started to fall in value.

The price of bitcoin cash, which began at $294 on Tuesday, took off 12 hours after the SegWit activation. By the start of Wednesday, the value had gone up to $370 and reached its record peak of $756.03 by mid-day.

By the end of Wednesday, it had already become the third-leading currency in the world by market capitalization. Its value is now around $75 billion, $10 billion more than Ripple, which used to be third in the ranking before bitcoin cash came along.

The tremor could be felt in the Korean market as well, albeit smaller in scale. The price of bitcoin went from around 3.2 million won ($2,838.4) on Tuesday to 3.04 million won by Thursday. This means in terms of dollars, the value of bitcoin in Korea has fallen by around $140, less than the near-$200 fall in the global market.

While miners are generally optimistic about the new cryptocurrency, many trading platforms are yet to jump on the bandwagon. Some of the largest platforms like Poloniex have not enabled bitcoin cash exchange.

Bithumb, Korea’s leading platform, has even suspended the trading of bitcoin until Aug. 7 to prevent any dramatic disruptions. Although Bithumb initially said it would enable bitcoin cash exchange on Thursday, it has since postponed the date, adding it would provide more details today.

The continuous feud between bitcoin and bitcoin cash could benefit other currencies like ethereum, which is especially popular in Korea. Bithumb is the largest ethereum exchange in the world, according to Coin Market Cap, and 20 percent of ethereum is traded for Korean won. “In the short term, alternative coins like ethereum will receive attention,” said Han Dae-hoon, an analyst from SK Securities.

The price of ethereum, the second-largest cryptocurrency in the world by market cap, has risen by about 20 percent since Tuesday.