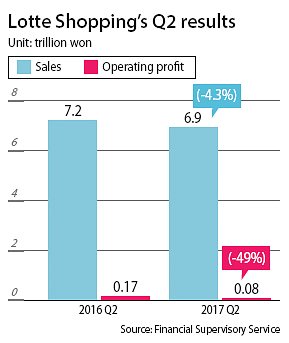 Lotte cited the decline of Chinese tourists to Korea and reduced sales in China as reasons for sluggish second-quarter results. Domestic figures were also down, as Lotte Department Store still struggled to recover from low sales over the past few years.

Sales for Lotte Mart retreated 7.9 percent year on year to 1.9 trillion won. The operating loss was 77 billion won. Sales in overseas branches fell 38 percent compared to last year. The biggest contributor was the loss of business in China, where sales recorded a striking drop of 95 percent.

Nearly all of Lotte Mart’s branches in China - 87 out of 99 - remain closed following boycotts and government retaliations after Lotte Group agreed a land swap with the Korean government that facilitated the Thaad deployment.

Lotte Shopping committed 360 billion won in March to keep its Chinese operations afloat, but is left with little to show for it. Lotte Mart is now looking for ways to secure more money, including issuing corporate bonds.

Analysts said that the slow performance of Lotte’s department stores and discount chains is likely to continue into the second half of the year as the possibility of Chinese operations recovering in the near future is low.

Food-related affiliates that export products to China were also affected. Lotte Food’s dry milk exports fell by half this year, contributing to the company’s operating profits falling 19 percent compared to last year. Lotte Confectionery’s China revenue was cut in half to 19.4 billion won during the second quarter.

Second quarter results for Lotte Duty Free haven’t been released but industry insiders are expecting worse earnings than the first quarter when the year on year sales growth stopped at 4.2 percent. The average annual growth rate in the previous three years was 24 percent.