“The Battleship Island,” a local big-budget movie about Korean forced laborers on Japan’s Hashima Island during World War II, has already sold more than five million tickets since hitting theaters last week. Although it was pushed down a spot Wednesday following the release of another period epic, “A Taxi Driver,” “The Battleship Island” is still likely to be the next local movie to hit the 10 million mark, backed by the film’s star power - Hwang Jung-min, So Ji-sub and Song Joong-ki - and media giant CJ E&M.

Despite its bullish box office performance, however, the movie has created controversy for a number of reasons, ranging from its approach to the sensitive historical issue to its domination of theatrical screens.

“‘The Battleship Island’ is not a tear-jerker movie that relies on extreme nationalism, or so-called gukbbong,” director Ryoo Seung-wan said during a press conference in June. Gukbbong is a portmanteau of the Korean words for country and methamphetamines, denoting a blind obsession with patriotism.

Many Korean movies released over the past few years have been criticized for forcefully adding elements of nationalism, as evidenced by “Operation Chromite” (2016) and “Ode to My Father” (2014).

Despite Ryoo’s efforts to move away from being deemed too patriotic, however, some viewers claim that “The Battleship Island” uses the heartbreaking event to forcefully arouse nationalism through depicting the pain and sorrow of forced Korean laborers under the control of Japanese.

One scene, where forced Korean laborers emotionally tear a “rising sun” flag used by the Imperial Japanese Army and remains to many a symbol of the country’s wartime aggression, was particularly criticized.

“The movie has gone too far. Let’s stop with patriotic marketing,” wrote one viewer on portal site Naver.

Another wrote, “Why do Korean films depict fact-based stories like this? To show Japan’s brutality [during the Japanese colonial period], a movie should be made based on facts instead of forced emotions, a poor plot and a candlelight scene that has nothing to do with the plot.” The comment got more than 20,000 likes.

The candlelight vigil scene is reminiscent of last winter’s national protest in Gwanghwamun Square in central Seoul that eventually led to the impeachment and removal of Park Geun-hye from the presidential office. 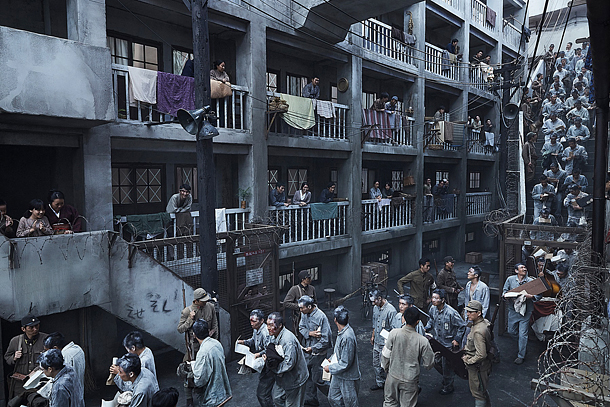 Though it fell a spot to number 2 at the box office after the release of “A Taxi Driver” Wednesday, “The Battleship Island” is still being shown at over 1,100 screens more than a week after its release on July 26. [CJ E&M]

Others, however, complain that the movie is not patriotic enough.

The movie clearly shows that it tried to avoid the “good Koreans and bad Japanese” narrative that usually finds itself into the plots of Korean movies set during the Japanese colonial period. But its depiction of some of the fictional characters that play important roles in the unfolding of the story has faced backlash from audiences.

Some are particularly sensitive to two fictional pro-Japanese Korean characters, who brutally exploit the Korean laborers: a respected independence fighter, who makes secret deals with Japanese forces, and a Japanese informant, who brutally manages Korean miners. Critics claim such depictions accentuate the brutality of the Japanese.

But according to one critic, these criticisms are not fair.

“The movie is based on real events. But it is fiction, not a documentary, [so it can be] freely interpreted,” said Yu Ji-na.

Though there have been a number of fictional period epics, people have been more sensitive because they had high expectations for the director.

“Ryoo Seung-wan is a filmmaker who began his career with indie movies, in which he took the side of social minority. [Seeing such a controversial blockbuster] from the director created a bigger disappointment,” said Yu.

The CJ E&M-distributed movie played at an unprecedented 2,027 screens on its opening day. It was far more than half of the total movie screens nationwide, earning the distinction as the first movie in Korea to secure more than 2,000 screens. Interestingly, some 1,000 of the total screens the movie played were in a CJ CGV, the nation’s largest theater chain.

The number of screens continued to exceed 2,000 in its debut weekend, during which it sold more than 2.51 million admissions. It was nearly double the number of the 1,029 screens that the weekend’s second-place film, “Despicable Me 3,” was given. “Dunkirk,” which came in third, played at only 634 screens.

The film’s domination of screens has angered moviegoers, who complained of being deprived of options went they went to the theater.

“I was searching for a ticket to watch ‘Dunkirk’ [last] Wednesday, but I couldn’t get one at CGV or Megabox .?.?. ‘The Battleship Island’ doesn’t play around,” wrote one commenter on Naver.

In response to such criticisms, Ryoo said on cable news channel YTN, “As a director who used to make indie movies, I feel sorry to be placed at the center of the controversy over screen monopoly, which has been ongoing for so many years. Though I said that the movie should not [go far as to] be screened in art cinema or IMAX screens, there are some parts that a director and a production team don’t have control over.”