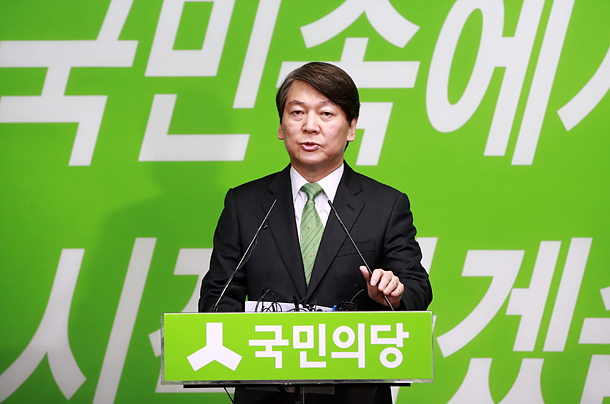 Rep. Ahn Cheol-soo, former presidential candidate of the People’s Party, holds a press conference on Thursday to announce his bid for the party chairmanship. [YONHAP]

Former People’s Party presidential nominee Ahn Cheol-soo declared his bid for the party chairmanship on Thursday, putting himself back in the political center as his party is still reeling from its biggest scandal.

Standing on the podium at the party headquarters in Yeouido, western Seoul, a somber-looking Ahn said he decided to run for party chief not because of personal interest, but “out of desperation” to revive the party.

“The People’s Party is now under great challenge,” said Ahn. “The way people are looking at our party now is different from the past. There is a great sense of anxiety that the party could be disbanded.”

Ahn founded the party in January of last year after defecting from the Democratic Party in protest of the way the DP was run by loyalists of Moon Jae-in, who won the May 9 election for president.

Ahn made the case that he is the only one who can stop the party from collapsing, despite protests from his own party members, who warned him that it was too early for him to re-enter politics.

Ahn’s bid declaration came 86 days after his crushing defeat in the May 9 snap election, in which he came in a distant third, even behind Hong Joon-pyo, the current chairman of the Liberty Korea Party. It also came 22 days after he offered a public apology over the illegal smear campaign against Moon at the height of the campaign in May. Bowing his head in apology, Ahn said he would “give up everything” and spend time in “self-reflection,” looking back over his past five years as a statesman.

To those opposed to his run for party chairmanship, the software mogul-turned-politician, who gave up his parliamentary seat before the May 9 election as a show of commitment, said he realized that self-reflection while being away from politics fell short of fulfilling his responsibility as a politician.

Ahn appealed to the public by warning that the demise of the People’s Party will lead back to a two-party system, which he said would only restore the “politics of self-interest” and populism.

By joining the race, he will compete with Rep. Chun Jung-bae and Rep. Chung Dong-young for the top party position. The People’s Party will elect its new leader at a party convention on Aug. 27. Chun, who co-chaired the People’s Party last year, assailed Ahn’s bid as “the worst decision” on a Facebook post Thursday.

Ahn’s entry into the race appears to reflect his growing concern that his influence in the party could fade if he continues to stay away from politics at a time when the party is suffering from single-digit approval in the wake of the fake audio tape scandal.

If Ahn clinches the party’s top position, his major test will come next June, when local elections are scheduled to take place.