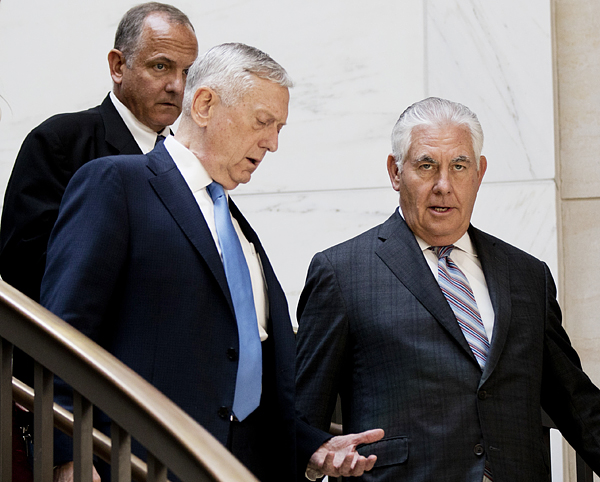 Secretary of Defense James Mattis and Secretary of State Rex Tillerson arrive to brief the Senate Foreign Relations Committee on the ongoing fight against the Islamic State on Capitol Hill in Washington, D.C. on Wednesday. [AP/YONHAP]

U.S. President Donald Trump on Wednesday signed into law a sweeping package of sanctions on North Korea, Iran and Russia that he said reflects his administration’s resolve to “punish and deter aggressive and destabilizing behavior.”

The legislation, referred to as the “Countering America’s Adversaries through Sanctions Act,” includes new measures that can effectively be considered secondary sanctions on North Korea, as Washington cranks up its pressure on the regime.

A set of bills with bipartisan support was passed by a wide margin in the U.S. House of Representatives and Senate last week and includes the “Korean Interdiction and Modernization of Sanctions Act.”

The bill on North Korea, along with bolstering UN Security Council measures, can be seen as implementing secondary sanctions on third-country entities supporting the North’s illegal activities.

It further penalizes the selling or transferring of crude oil, petroleum and natural gas resources to Pyongyang. It also sanctions any support of North Korean forced labor overseas and online gambling, sources of foreign currency for the cash-strapped regime.

Trump had expressed reluctance to back the legislation, which also bars him from lifting any existing sanctions against Russia without congressional approval.

The president said in a statement released Wednesday by the White House, “While I favor tough measures to punish and deter aggressive and destabilizing behavior by Iran, North Korea, and Russia, this legislation is significantly flawed.”

In a follow-up White House statement, Trump said, “I favor tough measures to punish and deter bad behavior by the rogue regimes in Tehran and Pyongyang” - leaving out Moscow.

He continued, “By limiting the executive’s flexibility, this bill makes it harder for the United States to strike good deals for the American people, and will drive China, Russia, and North Korea much closer together.”

This remark comes amid indications of strengthening of ties between Beijing and Moscow recently, including the release of a joint initiative on North Korea last month following a summit between Chinese President Xi Jinping and Russian President Vladimir Putin and a joint Russian-Chinese naval exercise last week in the Baltic Sea. It also signals a return to Cold War-era tensions.

Trump acknowledged that the bill “sends a clear message to Iran and North Korea that the American people will not tolerate their dangerous and destabilizing behavior” and that Washington will continue to work closely with its friends and allies, like Seoul and Tokyo, “to check those countries’ malignant activities.”

The real estate mogul referred to his business background and added, “As president, I can make far better deals with foreign countries than Congress.”

U.S. National Security Adviser H.R. McMaster warned that North Korean leader Kim Jong-un should not be sleeping easily at night in an interview with MSNBC.

“No, I think he should not be [sleeping well] because he has the whole world against him, right?” McMaster said when asked about Kim. “He’s isolated on this.”

He said the advance of North Korean ICBM technology constitutes a “grave threat” to Washington, without confirming if Pyongyang’s missiles are able to strike mainland United States.

After Senator Lindsey Graham of South Carolina said that Trump is willing to go to war with North Korea Tuesday, more Republican congressmen are pushing for stronger measures on Pyongyang.

“The time for words is over,” Senator Cory Gardner, a Republican from Colorado, wrote in a commentary on North Korea for CNN Wednesday. “We need to take decisive action before the situation on the Korean Peninsula leads to a nuclear war.”

Gardner, chairman of the Senate Foreign Relations Subcommittee on Asian and Pacific Affairs and an author of the North Korea Sanctions Policy and Enhancement Act of 2016, went onto call for “a complete economic embargo against the heinous regime in Pyongyang.”

He called for “every nation of conscience” to cut off all finance and trade with North Korea, with a few humanitarian exceptions, until Pyongyang peacefully denuclearizes.

Gardner said the UN Security Council “should immediately endorse such an embargo in a new resolution, and make it binding on all nations.”

Calling the Trump administration’s new sanctions only the “first step,” the senator urged the U.S. Treasury Department to find and block any dollar-denominated transactions that are found to benefit the North Korean regime, to “make sure those who are enabling these transactions can never do business with the United States.”

Despite Beijing’s warning to Washington that trade issues were not connected with the North Korean nuclear problem, Gardner said America’s “relationship with China must now hinge on Beijing’s full enforcement of a range of measures to stop Pyongyang.”

Pointing out that China has the most economic leverage over Pyongyang, he said the Trump administration “must employ a wide range of both coercive and non-coercive diplomatic tools to make clear to Beijing that any further coddling of Pyongyang means that business as usual with the United States will end.”

He also said Washington must continue its “show-of-force exercises around North Korea.”

Gardner has been pushing for bipartisan legislation that imposes a financial embargo on North Korea and punishes its enablers, namely China.

Trump is expected to sign a memorandum on Friday that will target China’s intellectual property and trade practices, reported CNBC.

The State Department also said Wednesday that U.S. citizens will be prohibited from traveling to North Korea starting Sept. 1 unless they have a special reason, calling for Americans in the country to leave before that date. North Korea is the only country Washington has banned travel to.

South Korea likewise may be reviewing unilateral sanctions on the North, according to Seoul government officials. There is special interest in seeing what sort of interactions unfold as diplomats of the six-party nations come together at the upcoming Asean Regional Forum (ARF) that kicks off Saturday in Manila. North Korean Foreign Minister Ri Yong-ho is expected to attend, but U.S. Secretary of State Rex Tillerson has no plans to meet Ri.