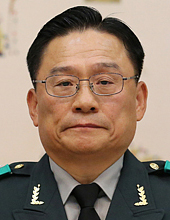 The Center for Military Human Rights Korea said Wednesday a soldier assigned to the commander’s residence had attempted suicide in 2015 after accumulated stress from the extreme demands from Park and his wife. Earlier this week, the center revealed reports that soldiers assigned to the commander served essentially as servants to him and his wife and endured slave-like treatment.

The couple was also alleged to have made soldiers wait on them during meal time, standing outside the dining area and serving them dessert, according to the center. One such soldier had to wear an electronic bracelet and wait to be summoned by the pair around-the-clock. When a bell was pressed either on the first-floor dining table or second-floor living area, the bracelet would vibrate. Park’s residence was a two-story building that spanned some 160 pyeong (5,693 square feet).

The military rights center said that the couple would go off on verbal tirades if the soldier was late to respond or hurdle objects at them, such as rotten fruit.

An Army commander can be assigned up to three so-called housekeeping soldiers, who work at his residence and cook or act as chauffeurs. The system is seen to take into consideration that Army chiefs often live separately from their families.