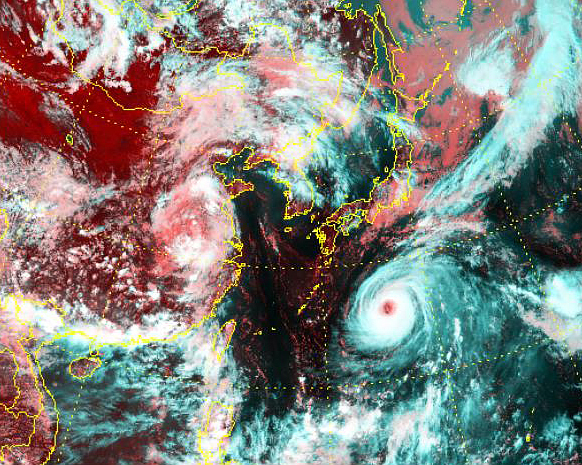 A strong typhoon is expected to reach waters off the southern and eastern parts of South Korea this weekend, bringing strong winds and high waves, the weather authorities said Thursday.

Typhoon Noru, the season’s fifth typhoon, was heading in a north-northwest direction east of the Japanese southern island prefecture of Okinawa as of 4:00 a.m. at a speed of 12 kph (7.46 mph) with an atmospheric pressure of 945 hectopascals, the Korea Meteorological Administration said.

After moving up through Okinawa, the typhoon is expected to approach the Straits of Korea on Saturday before influencing South Korea’s biggest island of Jeju, the southeastern coastal city of Busan and the southeastern province of South Gyeongsang.

On Thursday, the Jeju weather agency issued a preliminary warning for high waves off Jeju starting in the afternoon, saying the typhoon will likely bring heavy rain and high waves of 3 to 9 meters (9.84 to 29.53 ft) to the island Sunday and Monday.

Chances are high that the typhoon, formed in the sea 1,950 kilometers east-southeast of Tokyo on July 21, will become this year’s first one to effectively hit Jeju, the weather agency said.

The weather agency said South Korea will likely be affected by about two typhoons this summer, the same as an average year, with an average of 10 to 12 typhoons expected to form in the northwestern Pacific region.