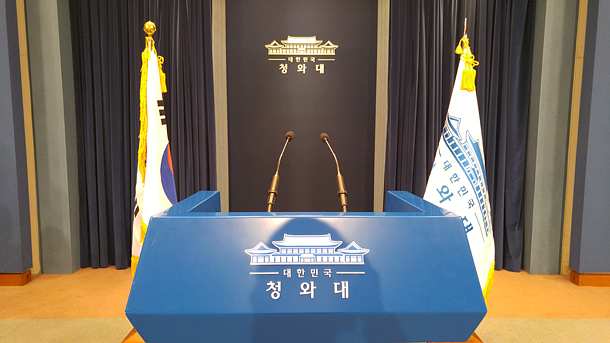 A podium for press conferences at the Blue House. President Moon Jae-in’s office will soon launch Blue House TV, an online channel to communicate directly with the public. [JOONGANG ILBO]

“Were it left to me to decide whether we should have a government without newspapers, or newspapers without a government, I should not hesitate a moment to prefer the latter,” Thomas Jefferson said. But once in office, he struggled with the merciless onslaught of the media.

In his first inaugural address, he promoted press freedom as a basic principle of his government. In the speech for his second term, there was a different nuance. After expressing disappointment with media attacks that he said hindered his government, Jefferson proposed that measures to supplement the situation might be found in the censorship of public opinion.

President Donald Trump, who believes the media is the enemy of the people, has said other great presidents including Andrew Jackson and Abraham Lincoln also battled the media. He is generally right. In fact, it is more accurate to say all leaders, including presidents who are not great, have been exposed to conflicts with the media. Even the author of the Declaration of Independence was shaken. Who would possibly enjoy media criticism?

Almost all Korean presidents, therefore, are thirsty about censoring the press and want to have direct communication with the people. Roh Tae-woo and Roh Moo-hyun, two very different presidents, have both tried delivering radio speeches, but neither succeeded in making the program popular. Publicity is about avoiding what must be avoided and announcing what should be announced. But when presidents only talk about their favorite subjects and please supporters, the programs rarely win public support.

President Lee Myung-bak made more than 100 radio speeches, but his situation was no different. Yang Jung-chul, a close confidante of the current president, Moon Jae-in, compared Lee’s PR attempts to the government-controlled news programs under military dictator Chun Doo Hwan.

Lee’s radio address was one-way delivery. Although he promoted a press-friendly government, the administration was not friendly to reporters’ questions. Journalists were barred from visiting the Blue House offices, and his aides avoided contact. The president, however, did not skip a radio address of self-admiration.

The Moon administration has said it will soon launch an online channel called Blue House TV to communicate directly with the public. Moon might appear in it. Creating a channel to directly communicate with the public is a welcome move. The world no longer accepts unilateral communication. The important thing is how it will be different from past administrations’ radio speeches. If the difference is between radio and television, the government channel KTV is already serving that purpose.

The Blue House made public a few photos of Moon a few days ago. They showed his encounters with people during his recent hiking trip. It was an obvious contrast to his reclusive predecessor’s summer vacations.

The Blue House also recently distributed photos showing Moon taking off his jacket on his own and his wife volunteering with flood recovery. Their emotional activities are impressive. The Blue House probably has a message it wants to share with the public.

But there are issues that the media and people really want to see and get answers on. They want to know the Blue House’s true intentions behind major issues like the phaseout of nuclear energy and deployment of the Thaad missile shield, both extremely controversial but incomprehensible moves. The answers should be given by presidential aides in charge of the issues, but the media is still barred from entering the Blue House compound to speak with the aides. No meeting has been arranged so far to give candid explanations to reporters.

The Blue House’s priority should be allowing more free access to reporters, not self-administration of publicity. Only then will cynical responses to its PR efforts disappear. The Blue House must learn from the spirit of former presidents’ radio communications, not their format. The administration has already made a promise to be a government that will communicate with the nation. So here is our question: will the Blue House TV’s news actually discuss what the media and the people really want to know?