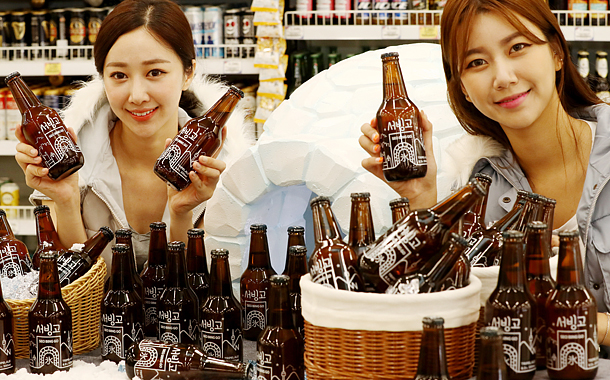 Korea’s beer industry, often overlooked as bland and monotonous, is seeing new life with domestic craft beers named after specific neighborhoods or regions across the country.

Not only the labeling, but also the packaging and flavor are catching the interests of local beer aficionados.

A Homeplus official said positive response to local craft beers was the driving force behind the laudable result.

The most recently launched product is Seo Bing Go, made by Korea Craft Brewery (KCB). Seo Bing Go is a Belgian-style fruity ale that has an alcohol content of 8.5 percent.

Seobinggo-dong is a small neighborhood in Yongsan District, central Seoul, where an icehouse stood during the Joseon era. Seo Bing Go is designed to give its consumers a “rare” flavor, in acknowledgment that ice was a hard-to-get item at the time. Haeundae Beach Ale, another KCB product, which launched in June, is dedicated to a famous coastal area in Busan.

KCB said these two products drove up sales by 20 to 30 percent compared to before they launched.

“The craft beer market is still a small portion of Korea’s beer industry,” said Chae Song-hwa, marketing director of Ark, KCB’s flagship craft beer brand. “But with this kind of familiar naming and flavor design, we think craft beer can get closer to consumers.”

“For example, people would be more interested in Haeundae Beach Ale than a beer simply called Golden Ale,” she said. 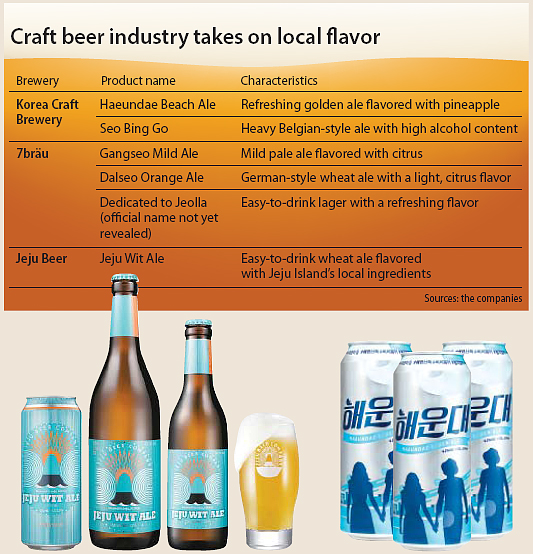 A representative from 7brau, the local microbrewery behind Gangseo Mild Ale and Dalseo Orange Ale, said telling the story of not-so-spotlighted neighborhoods was behind launching the series last year.

“Dalseo and Gangseo are both somewhat neglected neighborhoods but they are full of charm,” said Kim Kyo-ju, a director at 7brau.

“From package design to flavor, we hoped the products would bring out childhood memories,” he added.

Dalseo’s orange packaging has a picture of Duryu Park, a well-known amusement park in the district, drawn on it, while Gangseo Mild Ale’s label features an airplane and a residential area. Gimpo Airport is in Gangseo District.

“The Gangseo area is full of single households whose occupants commute to work in Yeouido and other parts of the city. We made the beer easy to drink for those who would want it alone after a tough day at work,” Kim explained.

7brau will launch a third beer, this time dedicated to Jeolla province in the southern area of Korea, in early August. The exact product name hasn’t yet been revealed. A lager, the beer has been designed to give residents a refreshing feeling.

KCB’s Haeundae ale, meanwhile, is designed to match the sunny coastal area its named for. Containing low alcohol content, 4.2 percent, KCB said it is an easy-to-drink beer with a hint of pineapple flavor that matches the neighborhood.

Some may mistakenly think these craft beers are manufactured in the regions they are dedicated to. In fact, most are not.

7brau’s Dalseo and Gangseo products are brewed in Hoengseong in Gangwon, while KCB’s Haeundae and Seo Bing Go beers are brewed in Eumseong in North Chungcheong. The key ingredients of the products, such as hops and yeast, are imported from either Europe or North America. The yeast for Seo Bing Go, for example, is imported from Belgium.

“But at the moment, the reality is that hops and yeast are imported from Europe,” he added.

Jeju Wit Beer, which will only be available on Jeju Island, is made with local ingredients such as peelings from Jeju’s famous tangerines, to give its ale a citrus flavor. Yet its malt is imported from Germany.

Korea’s beer industry has largely been dominated by brewery behemoths such as Hite Jinro and Oriental Brewery for a long time, and this state of affairs is partially responsible for the ill reputation attached to Korean beer. Until 2014, craft beers made in microbreweries could not be sold at retail channels, but had to be enjoyed in the shop where they were made.

Although the ingredients are not 100 percent Korean, these microbreweries hope the latest trends in domestic craft beer could be an opportunity for the industry to leap forward.

“We believe labeling and conceptualizing craft beer with familiar neighborhoods will help expand the consumer base and enhance accessibility,” said Chae from KCB.