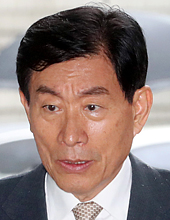 Park ultimately won out against current President Moon Jae-in by a small margin, though it is unclear how much impact the NIS had on public opinion at the time.

The team, which launched their probe last month after Moon became president in a snap election in May, has yet to mention whether it will hand over their evidence to prosecutors or formally ask them to dig deeper, which would likely affect the prosecution’s own trial with Won.

Last week, prosecutors requested a local court hand down a four-year jail term. A verdict is expected to come later this month.

The NIS team said Thursday that Won was found to have led a group of civilians from 2009 to 2012, who were ordered to post online comments slandering liberal politicians and presidential candidates. The group, according to the NIS, was funded through state coffers.

The so-called “commentary troop,” a term coined by the local media, gathered members from all over the country, said the NIS team, from office workers and CEOs to students and housekeepers. The troop grew over the years, peaking at nearly 3,500 members in 2012 by the time Korea held its presidential election.

Their tasks ranged from tracking North Korea’s espionage attacks on the country’s most popular search engines to leaving right-leaning comments on online posts. Some 200 million won ($177,800) was collectively paid to troop members every month, according to the internal probe.

The NIS team also said they found evidence indicating Won ordered his underlings to crop his remarks from a transcript that was recently made public by the prosecution. On July 24, prosecutors unveiled transcripts of NIS meetings from 2009 to 2012 attended by Won, which featured the spy chief ordering his officers to carry out “psychological warfare” against the public.

Former President Lee Myung-bak has not made any public announcement in response to the team’s results, while the opposition Liberty Korea Party accused it of seeking “political revenge.”

“The task force was launched on the mission to investigate the intelligence authority’s past transgressions,” said Jun Hee-kyung, spokeswoman of the Liberty Korea Party, “but it’s now focusing only on those that occurred in the Lee Myung-bak and Park Geun-hye administrations.”